Skulls of one of the previous chiefs.

Malekula was recognized as the last island to end cannibalism in 1969.  While the islanders were embarrassed of what their ancestors had done, the Department of Tourism has embraced the islands reputation of cannibalism and custom as a selling point.  This has resulted in tourists visiting the island to see the cannibal sites and watch the custom dances.  Today the islanders are eager to lead you on a trip into the mountains and tell you stories of the past.

So, who were the unlucky ones that were eaten?  Well first you need to understand that there were two tribes on the island, the Big and the Small Nambas, who did not get along and their disagreements often ended in war.  You need to think small scale war, not the WW1 or 2 type.  The type of war resulted in anywhere up to 4 people being killed. Cannibalism generally occurred after a battle or if a member of one tribe came too close to an area owned by the other tribe.  The cannibalism extended to one or two people, not a whole village.  The captured would be taken to a special area where they were killed, butchered, cooked and eaten. Women did not partake in the activity.

While its believed a few missionaries met their end through cannibalism, the majority of deaths were through tribal wars.

Dad had met a local man, George, who was very eager to take us on a hike to see a cannibal site, so they organised a time and place for the following the morning.  Only Dad, Josh and I went on a walk to the Small Namba’s Cannibal Site.  We climbed over gnarled roots and walked through lengthy grass.  We were fatigued.  After four extremely long hours, I almost cried when we reached the top.  We had some yellow grape fruit.  The juice was a great refreshment. 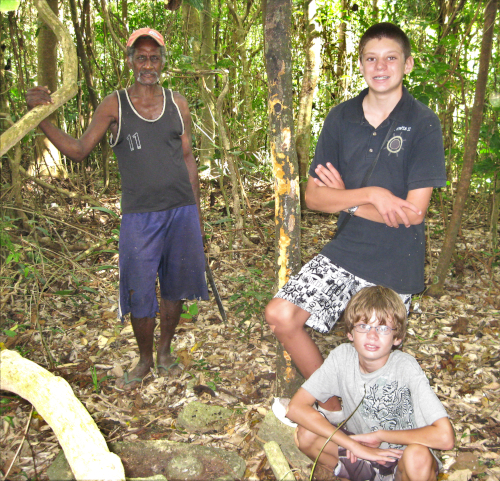 George, Josh and I at the cannibal site,

After our short break we began our descent to the cannibal site.  At one point I almost fell in a spider web and at another point I did.  We finally reached the cannibal site.  George, our guide, said that this big rock was the fire stone, where the chief made fire. Was it for cooking their captives? 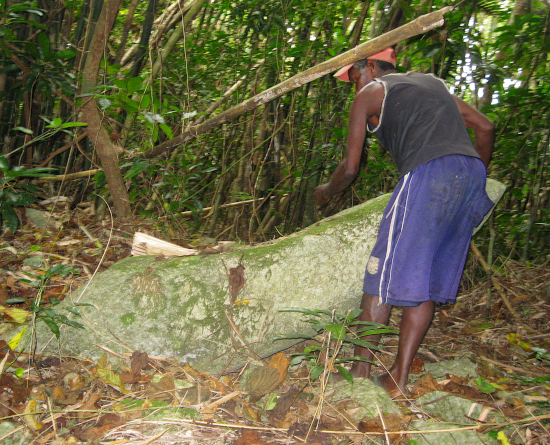 We were then taken to a stone that had a small hole in it.  George reached into the hole and brought out two worn pieces of the first chief’s skull.  It was creepy.  George said that when a chief died, members of the tribe cut off the corpse’s head and guard it from vermin and dogs for a week, before it was buried in a house.

George showed us a flying fox stone, where if someone said something against the chief, the chief would mutter a spell and flying foxes would eat all the insulter’s crops, and they would only stop if the insulter said sorry to the chief and gave him a pig.

George pointed out a stone slab resting on some smaller rocks that was one the seat of the Chief.  Josh and I found we could both fit on the seat. 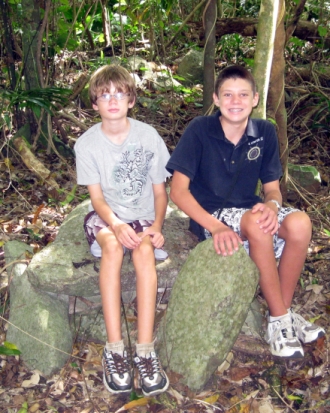 We then went downhill to a pile of rocks where I pretended to eat a human bone.  I almost dropped the bone when a tiny lizard popped out of it and jumped to the ground.

On our return trip we got lost.  George blamed the evil spirits clouding his mind.  I think he forgot his way. We were beyond exhausted when we reached a village and were able to replenish our water bottles with rain water, which we drank thirstily.

We finally reached the dingy, with sore legs.  George said that Josh and I were the first kids to climb for eight hours to that cannibal site.  We made history!