On the outskirts of Phnom Penh was the Tuol Svay Pray High School, until it was commandeered by the Khmer Rouge and renamed S21 or security prison 21.  S21 was used to torture, interrogate and execute prisoners and was one of well over 150 torture and execution centers throughout Cambodia.  Prisoners were either tortured to death or sent to Choeung Ek (killing fields) for what they thought was re-education, but really it was their execution.  It is believed that over 12 000 people were imprisoned and there were only 7 known survivors.  Since the Khmer Rouge, the building has had another name change and is now called the Genocide Museum in Phnom Penh. 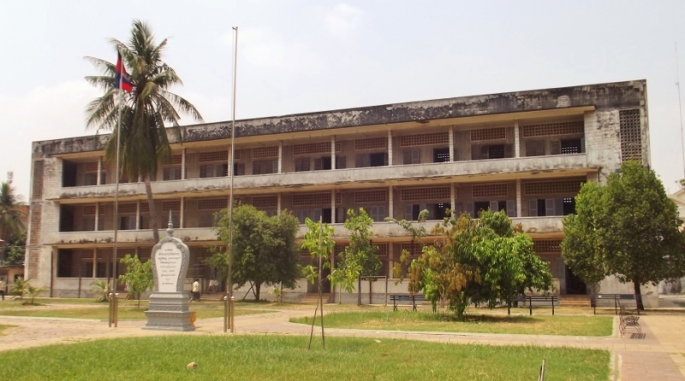 S21 is a former Khmer Rouge prison, but as you enter through the gates it looks like any secondary school from the 1970s, until you enter the buildings.  We visited the four buildings starting with building A.

In 1979, Vietnamese photographer Ho Van Tay and a colleague followed the smell of dead bodies into the S21.  In Building A they discovered and photographed 14 dead people, including one women.  The building is furnished to replicate how it was when used as a prison and contains photographs of Ho’s discovery.

Building B is where prisoners were forced to give detailed autobiographies beginning with their childhood until their arrest and to make fake confessions.  A majority of the prisoners were also photographed, before being stripped to their underwear and possessions confiscated. It is believed that despite foreigners evacuating from Cambodia in 1975, over 500, mainly Vietnamese and Thai, but also some Americans, British, New Zealanders and an Australian who had been traveling in Cambodia at the time, where taken prisoner.  None of the foreigners survived. Today Building B is a museum and contains nearly 6 000 faces of the photographed prisoners. 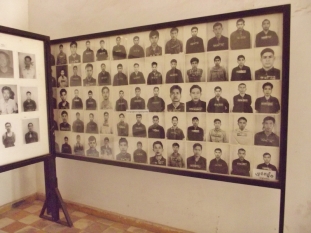 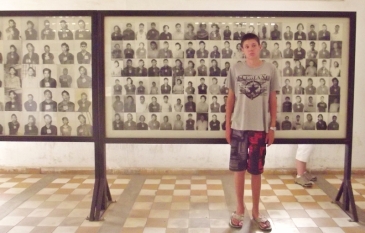 Building C was the most interesting as it still had all the original barbed wire across the windows to stop prisoners from escaping or committing suicide. There are biographies of the people that were part of the Khmer Rouge organization.  There are three levels of small prison cells that remain exactly as they were in the 70s. 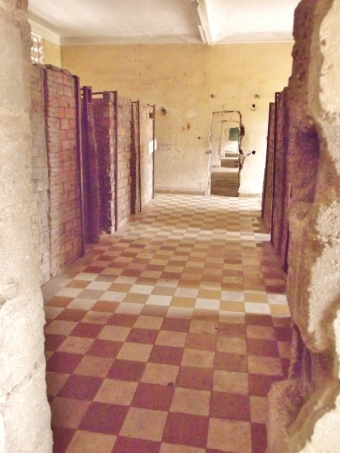 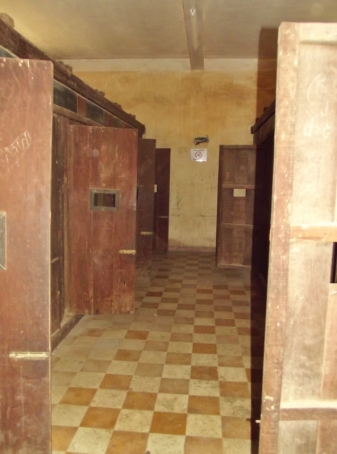 Building D was very sad because it held stories of the tortures of the prisoners and detailed descriptions of how the tortures were carried out by the Khmer Rouge.  Some of the torture mechanisms used on the prisoners include electric shocks, pulling out fingernails and then pouring alcohol over them, holding prisoners heads under water, searing skin with hot metal instruments and sometimes raping women prisoners.  Only seven prisoners survived.

During our visit one of the survivors of the S21, Chum Mey, was seated in the courtyard with a book he has written about his time in S21.  He apparently spends a lot of time there and happily talks to tourists about his experiences.  We did not stop to talk to him, he had a bit of a queue.