This was the final celebration of Elliot’s 18th birthday.  Gary’s (Elliot’s father) place of employment gave Elliot a free day on one of the charter catamarans.  We along with Mike and Lesley and Venessa, Gary, Elliot and Marina went out for the day.  We sailed down to the sculpture garden where we snorkeled and admired the sculptures. 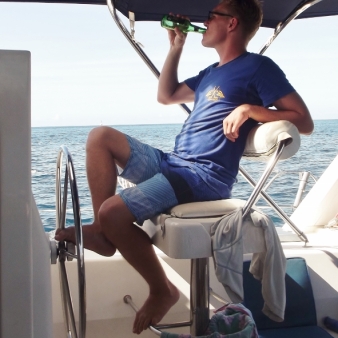 Tristan and Elliot helped out with the sails and driving the boat while most of the adults relaxed.  Elliot’s last birthday cake he shared with Ava as its her birthday in a couple of days.

In 2004, a dive instructor named Jason deCaires Taylor (click on the link to read more) who had studied scultpure in college approached the government and the dive center he worked for and also marine biologists about the idea of doing an underwater sculpture garden.  Hurricane Ivan had destroyed a lot of the nearby reef structure that attracted divers, so he though that his sculpture park would offer an alternative but also encourage new reef growth.  Taylor over a period of a decade created 8 projects where he cast giant cement sculptures that were sunk into the seabeds.  Each of his projects tells a story, for example the sculpture of a man at a typewriter at his desk, was made after Taylor’s grandfather died, his grandfather was an avid letter writer, so he created the sculpture as his last letter to his grandfather.  Vicissitudes one of the 8 projects is a circle of 26 children holding hands and forming a circle, took 6 months to complete and weighs about 15 tonnes, which he installed in sections.

Tristan took all of the underwater photos as my ears would not clear for me to dive down.  He did a great job. 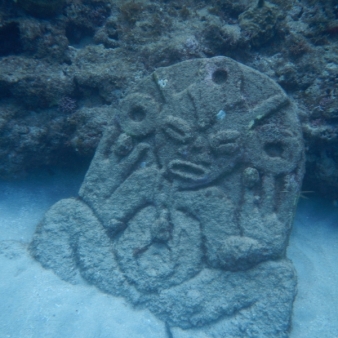 These are four of the 14 Amerindian petroglyphs that was made by local Troy Lewis and was influenced by the ceremonial carvings of the early Amerindian tribes that were in Grenada. 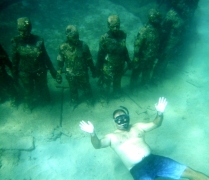 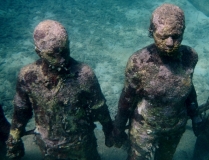 Vicissitudes is one area of the sculpture garden which has 26 life-size children from different ethnic background, all holding hands and facing outwards.

Photo on the left is of the sculpture from 2011 called, ‘Christ of the Deep’ and was done by local artist Troy Lewis.  It celebrates the 50th anniversary of the sinking of the Bianca C in 1961, locals and fishermen rescued 600 people and opened their homes to them.  Photo on the right is of a woman praying. 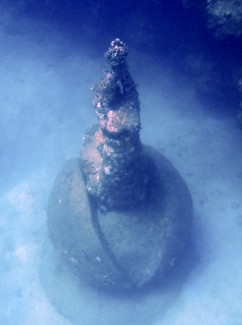 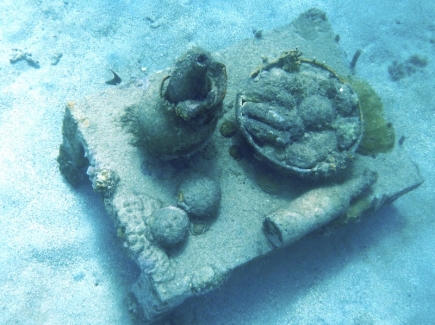 The photo on the left is a sculpture that was done in 2016 of the Nutmeg princess by Norwegian artist, Lene Kilde and is inspired by a book by Richardo Keens-Douglas called ‘The Nutmeg Princess’ in 1992. The photo on the right is called unstill life, unlike the traditional paintings of still life objects this one changes as coral and growth takes over.