Etosha National Park is located in the northwest of Namibia, in the Kunene area. The Etosha pan was first discovered by Europeans in 1851 while in the company of Ovambo Traders.  The meaning of Etosha is ‘The Great White Place” in the Ovambo language.

The Etosha Park is the habitat to hundreds of animals (birds, reptiles and mammals).  During the 1970s and 1980s the park suffered droughts and crossfire of the border war between Namibia, South Africa and Angola which wiped out a majority of the wildlife.  Conservation efforts have seen an increase in park animals, so that it is now a great place to view them.

The Etosha pan is huge and can be seen from space. Some people believe that the Etosha pan was made 100 million years ago. The winter in Etosha is a dry season where there is plenty of time to find animals drinking, bathing or playing in the waterholes. Bird lovers should enjoy summer there as the vegetation is beautiful and lush because of all the rain so it attracts birds and other animals.

We arrived around lunch time and did our first game drive mid afternoon, where we saw lots of deer, zebras and giraffes.  We stayed at the Okaukuejo campsite and we had jackals walking around our campsite as well as huge social weaver’s nests in the nearby trees. 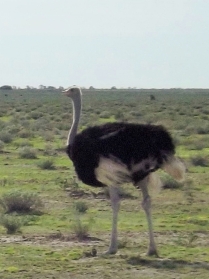 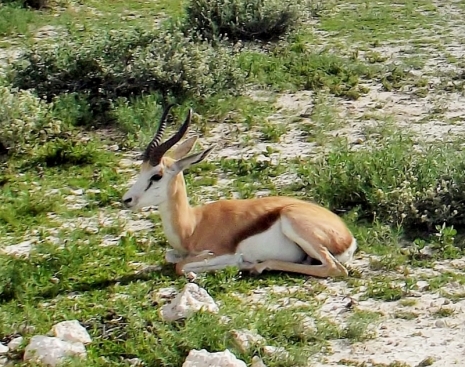 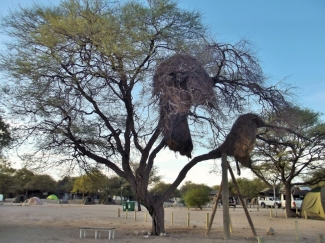 Around Okaukuejo campsite in the early evening, a jackal was sniffing around the RV looking for food and the trees nearby had huge social weaver nests.

Our early morning game drive took us to a waterhole where we saw nothing, no animals.  We sat for a while and decided we should move on so we didn’t miss seeing the early morning animal activity.  We drove around a while and everyone was getting hungry for breakfast so we we went back to the original waterhole and were surprised to see a lot of female elephants, babies and juveniles.  While watching the elephants, mum cooked breakfast which we enjoyed.

During our afternoon game drive, we saw a lot of deer, buffalo and giraffe.  I love this photo of the giraffe, just watching us from above the trees.

Our second night in Etosha we stayed in Halali Campsite and were enjoying an afternoon sun-downer when Andrew spotted the little critter below, known as a honey badger.  The honey badger was pretty oblivious to all the campers but got very up close and personal with German tourists, walking right up to their picnic food and stealing their raw sausages.  He was a bit cheeky.

We did another early morning game drive which had a thrilling end, when heading back to our campsite we encountered three large teenage males walking down the road towards us.  Two of them ventured off the road, but the biggest was unhappy with us being there, flapped his ears and headed straight for us.  Andrew threw the RV in reverse and got out of his way.  Its amazing how big they are when they get that close. 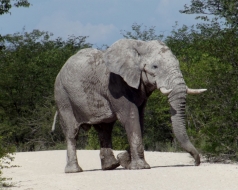 Our afternoon game drive took us to more waterholes where we saw black faced impala, which are native to Namibia and banded mongoose relaxing on the middle of the sign on the road. 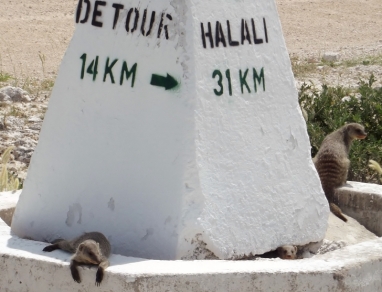 Our last game drive in Etosha we saw lots of gemsbok (onyx) which I think are the prettiest of the deer, ostrich and zebra. 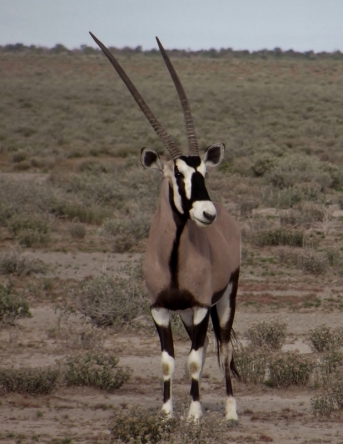 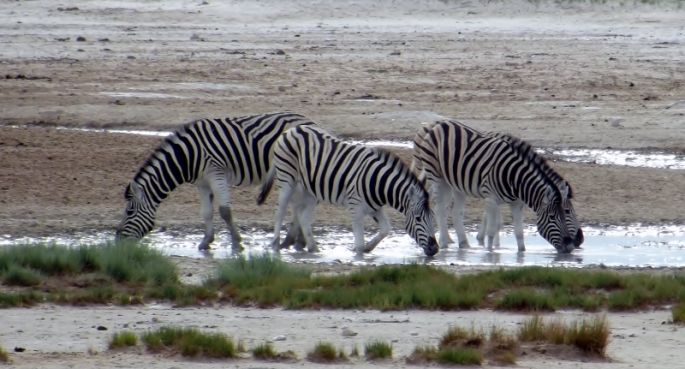 We saw zebra throughout the park, put on the morning game drive there were herds around the waterhole and we saw a real zebra crossing. 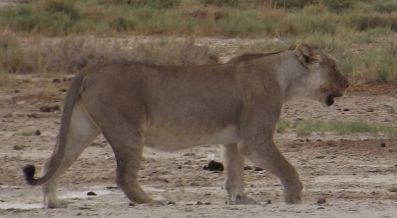 We saw our first lion at Etosha around the waterhole which was filled with zebra and deer, none of which were concerned with her being there.  We also saw a few herds of ostrich on our morning drive.

I thought that seeing all the animals out there was quite spectacular and it was definetly a once in a lifetime experience. The Etosha National Park had a lot of animals in it, I especially liked seeing the lions and the cute baby animals.

During our time in Etosha, both Max and Ava had a go at steering the RV.

Opening and Closing Times – The park opens at sunrise and closes at sunset, this time varies throughout the year, but you can check the website for details.

Park Entrance: There are four gates that you can enter the park:

Written and researched by Ava, photos by mum