Venessa (Neptune 2) organised for us to do an island tour with Cutty, a local and all knowledgeable on both the history and fauna of Grenada.

One of our stops was to a warehouse which holds all of the cocoa beans.  Bags from different areas of Grenada are labeled and kept together as buyers will often request beans from specific areas.  We tried several beans from some of the areas and surprisingly they do all have their own unique taste.  You can see the cocoa fruit in the first photo below. 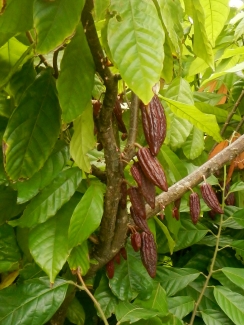 We also learnt about the nutmeg industry when touring through a nutmeg factory.  Local farmers bring their nutmeg in which is sorted so the light empty ones are thrown and the rest weighed, to which the farmers receive $3 EC or $1.50 AUD a pound.  From there they soak them in water and if they sink they are better value nutmeg and are separated from the floaters which are still sold but are more likely to end up as ground nutmeg. The nutmeg are bagged and sold whole and sold to different countries who then process it.  They sell nutmeg in the local markets here, you crack them like a nut and can then grate it and add it to your meals or desserts.

The red stuff is the first photo below is mace.  The nutmeg is an orange fruit which looks a bit like an apricot, the fruit is removed and the mace then surrounds the nut.  The farmers are paid according to the quality of the mace if its grade 1 like in the photo its $5 EC ($2.50 AUD), 2 was $4 ($2AUD) and grade 3 was about $3 EC or $1.50 a pound.

Hurricane Ivan in 2003 destroyed 90% of the nutmeg trees in Grenada their biggest export.  Although the industry is improving it is still only about 15% of the original production.  Grenada had been the second biggest nutmeg exporter after Indonesia.

Our next stop before lunch, I think was everyone’s favourite, the chocolate factories.  We did a tour through a factory learning how the chocolate is taken from coca beans to chocolate.  We continued on down the road to another factory where the kids (and adults) all indulged by spending some of their hard earned pocket money on the different varieties of dark chocolate made there, after tasting all of the samplers.

Marina, Ava, Siobhan and Maren waiting for our rum tour

I will attempt to explain the rum making process, possibly very badly.  Photo 1 is of the 17th century water wheel, which when turned on, powers the machine in photo 2.  The machine is then manually fed sugar cane and it crushes it to extract it’s juice which is fed into another shed and added to water.  The liquid is left to ferment in large vats, as can be seen in photo 3 until the bubbles disappear (usually about 7 days).  The final step is the distilling in photo 4.  If the proof of the rum is not high enough then they distill it again.  It is then bottled.  Pretty simple, huh?  I did not try the strongest but Andrew said it was strong.

Our final stop for the day was at the waterfall, the kids went swimming and enjoyed their refreshing swim. 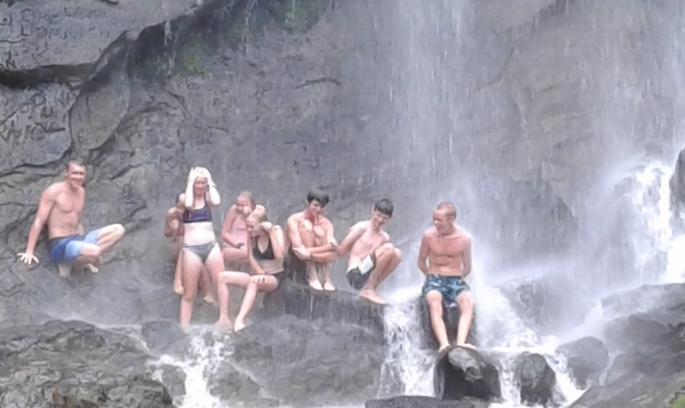