Fundamental to the Cuban way of life is music and art.  Steve our Australian driver and guide, took us to what is unofficially known as Fusterlandia.  Fusterlandia is the brain child of a street artist named Jose Fuster, who 20 years ago set about transforming his neighbourhood using a kaleidoscope of coloured mosaic tiles, bottles and statues to decorate fences, bus stops, walls, roofs and his own workshop. His work seems to have drawn on ideas from other artists like Picasso, Salvador Dahli and Gaudi.  There is just so much to see wandering the streets looking at each piece, I was really awestruck at how ‘cool’ the neighbourhood looked.  Jose’s workshop was not open the day we went, it is however open Wednesday – Sunday from 9 am to 4 pm if you ever find yourself in Havana. 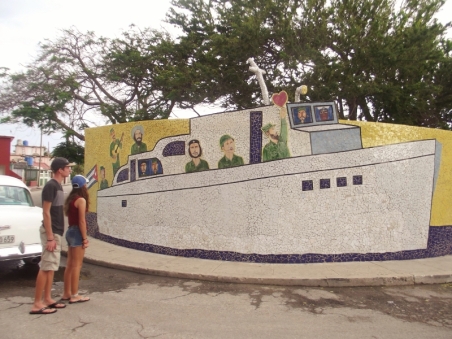 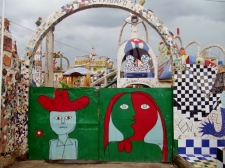 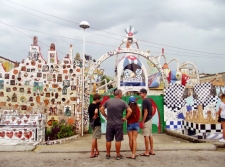 The photo on the left is of Castro brothers and other key party members on the boat they took from Mexico to Cuba to start the revolution.  The two photos on the right are of Jose Fuster’s art workshop which he has fusterised. 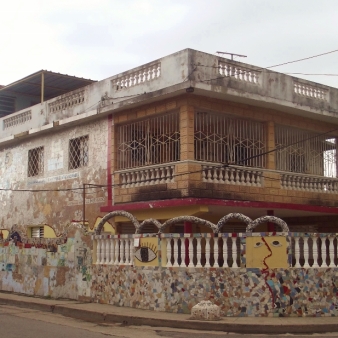 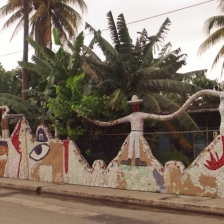 More of the homes that Fuster has fustified in his neighbourhood

Our next stop, which was not on my list of places to visit, was the Havana Forest that could easily be a set of some big box office movie.  The forest, which although is quite small is set on some hills and slopes down to a small river.  The trees in the forest are encompassed by large vines.  It was drizzling with rain when we visited which gave it an almost misty look, only further adding to its movie set appeal.  Only Tristan, Ava and I went for a quick look around and snapped a few photos. 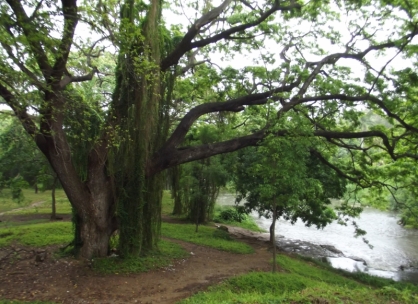 Another place that was not on my list to see but Steve took us to, unfortunately I can’t remember the name and have tried googling unsuccessfully to find out what its called.  The park in a suburban area in Havana is filled with sculptures one particularly weird one has a hypodermic needle going through a tree. 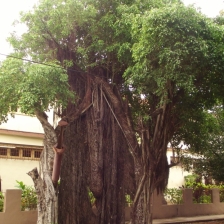 We continued for a drive around Old Havana’s narrow streets before visiting El Cristo de La Habana. It is a 20 meter tall (66 feet), marble sculpture of Jesus, perched on a hilltop park. In 1957 the wife of the then president, Batista, having just survived an assassination attempt at the Presidential Palace in March 1957, wanted to have a statue of Jesus built for him.  The statue was created by Jilma Madera in 1958, after his design one the competition.

Jilma spent two years in Italy supervising the parts of his plaster model as it was transformed into Carrara marble.  The 67 pieces were blessed by Pope Pius XII before it was transported back to Cuba and assembled by 17 men.  That statue was unveiled on Christmas Day 1958, one day prior to the dictator, Batista, fleeing the country. During the statues time it has been hit by lightning some 4 times.  During our visit there was a film crew set up and nobody could walk around the statue, so I went down the hill a little ways to see it.  The hill where the statue is perched has a wonderful view over the city of Havana, I imagine from the base of the statue itself it would be even better. There is no charge to visit the statue.

We continued on to Castillo de los Tres Reyes Magos del Morro, locally known as El Morro.  El Morro is located across the harbour from Havana, at the entrance to the Bay. The construction of El Morro began in 1590 and was completed in 1630, having been designed by Italian, Giovanni Battista Antonelli and built by slaves.  The fort is composed of two bastions, Tejada and Austria and a semibastion called the 12 apostles.  On the North West corner of the fort is a lighthouse, which was built in the 19th century and can be climbed for an additional 2CUC.  We did not visit the lighthouse but it is supposed to have great views of both Havana and the ocean. 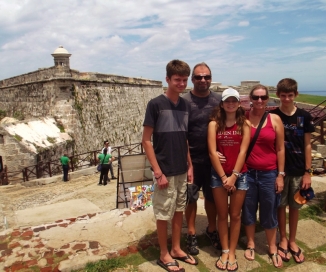 On the opposite shore to El Morro is La Punta castle.  At one point in time these two castles were linked by iron chain, that if enemy ships (pirates were spotted was pulled tight to prevent them entering.  El Morro first saw action in 1762, when the British invaded Havana.  Rather than attack from the ocean/bay the British sieged the fortress by coming from the hills in the rear of the castle.   Cuba was eventually returned to Spain later in the 18th century and the Spanish quickly built another fortress called San Carlos de La Cabana Castle in the hills to prevent another siege like the one in 1762. 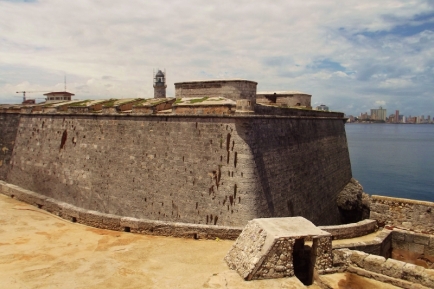 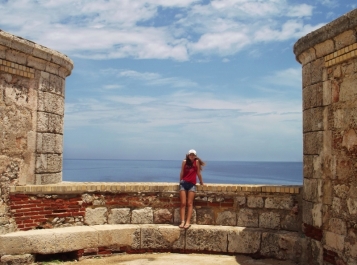 We returned to the old city for lunch, which was amazing pizza, best I’ve had in a long time, before wandering around in Old Havana.  This was the view from where we ate lunch, amazing buildings everywhere.

Steve dropped us off at the El Capitolio so we could have a look, it has been under renovations for a few years now but is expected to be reopened sometime in 2018.  The large domed building, which although similar to America’s Capitol building in Washington DC, was actually modelled after the Pantheon in Paris. Construction began in 1926 and took around 5 000 workers over 3 years to construct and cost about $17 million US, funded by sugar money.  The building has served many purposes over the years from the seat of Cuban congress, to the Cuban Academy of Science and National Library of Science and Technology and when it reopens it will house Cuba’s National Assembly. 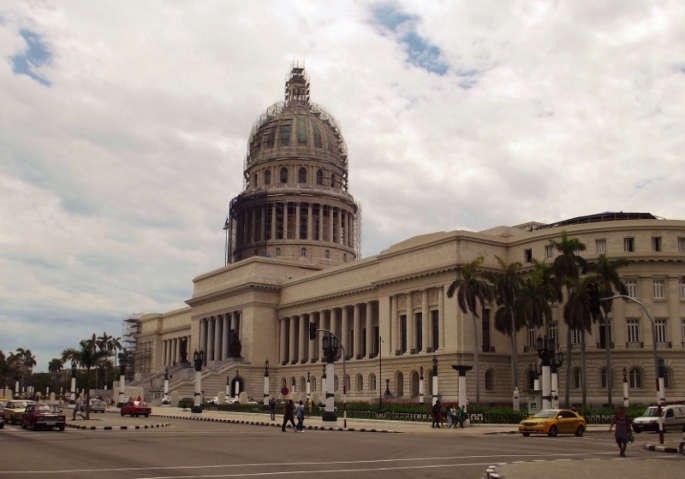 Just down the road from El Capitolio is the Gran Teatro de La Habana.  The building has had a face-lift and is truly beautiful, ornately designed building.  You can actually do tours of the building in English and Spanish or see one of the music, dance or ballet performances there.

Gran Teatro de La Habana where you can see dance, music and ballet performances in this ornate building

Steve picked us up and we parked over near the Plaza de la Catedral, which is home to the beautiful Catedral de San Cristobal which dates back to the 1700s.  The building has an ornate, baroque façade and its interior is lit with Chandeliers that draw your eyes to the cupola. 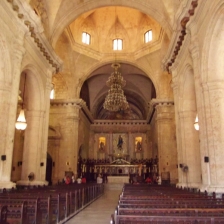 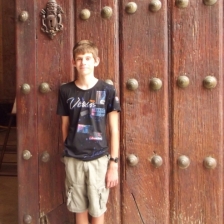 Cathedral de san Cristobal, beautiful both inside and out

Just nearby the plaza is a bar, La Bodeguita del Medio, which was frequented by Fidel Castro, Nat King Cole and Ernest Hemmingway and where the mojito originated from.  An Ernest Hemmingway quote, “My mojito in La Bodeguita, My daiquiri in El Floridita” and signature takes centre stage at the bar, which frequently has bands playing.  The bar itself is very small and the walls are covered with signatures from those who have visited, apparently the walls are repainted every 6 months of so.  A mojito will set you back about 7 CUC. 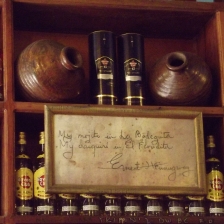 Also off the plaza is an artist’s workshop, called ‘Taller Experimental de Grafica’ which specialises in lithograph prints.  I asked one of the artists who was working if I could photograph him which he was happy for me to do and then the artist across from him lifted up his work so I could photograph his as well.  There is artwork for sale and the artists are very friendly and happy to converse about their work. 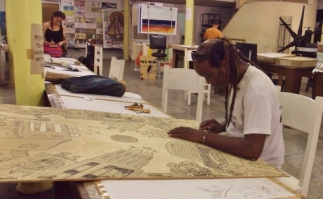 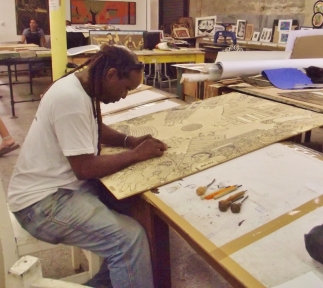 Plaza Vieja one of the oldest and most popular plazas, although was mostly empty when we visited, is surrounded by beautiful pastel buildings and one odd, but apparently famous sculpture of a naked lady holding a fork on a chicken.  The bronze sculpture by Roberto Fabelo is the 2004 National Arts Award Winner, the meaning of it can only be speculated by the viewer.

As we wandered between plazas we had this very cool view of the Capitola building between the streets.  My favourite photo. 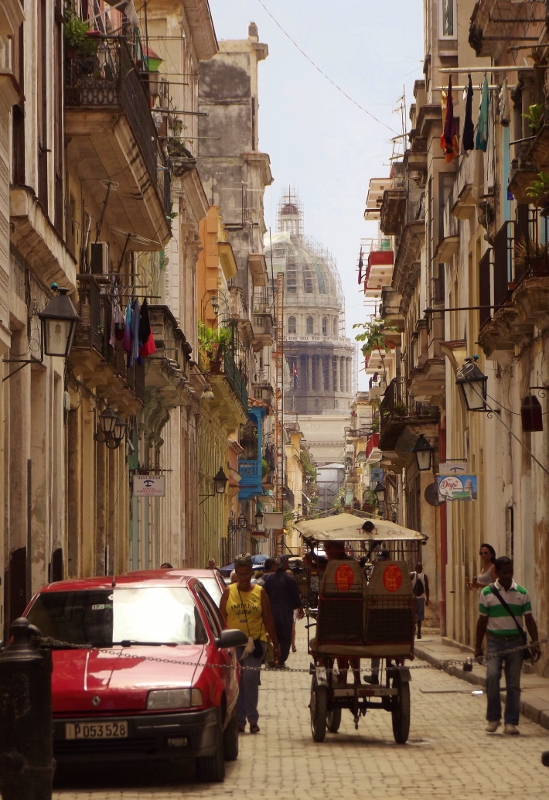 Plaza de san Francisco houses the restored 16th century Basilica Menor y Convento de San Francisco de Asisi which is used as a concert hall and the stock exchange building, although not currently used as one. In the square is the sculpture ‘The Conversation’, which Tristan really liked. 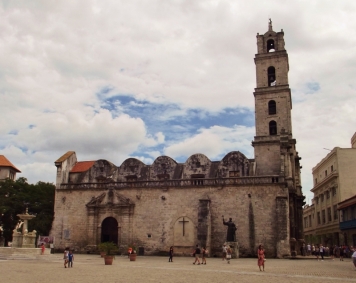 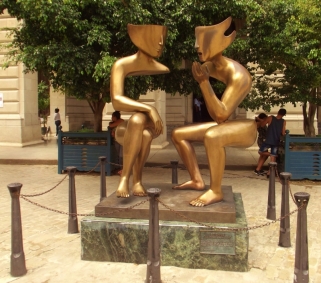 Leaving behind the Old Havana we drove to Revolution square which is a symbolic place in Cuba and one of the largest squares in Cuba and named after the armed Cuban people triumphed in 1959.  Since the revolution the square has been used by Fidel Castro to deliver important speeches.  Central to the square is the pyramidal tower with a statue of Jose Marti, who is considered a national hero and poet, seated below it. Opposite the tower are two government buildings one with a relief of Che Guevara with the phrase ‘Hasta la Victoria Siempre’ and another with Camilo Cienfuegos with the phrase ‘Vas bie Fidel’ 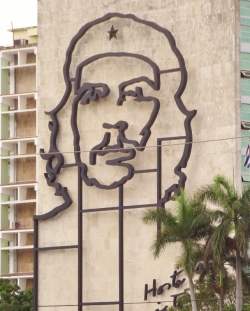 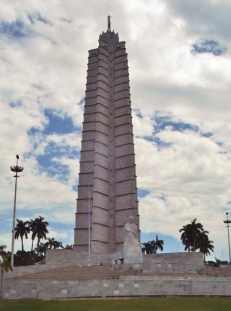 Photo on the left of Che Guevara, Middle tower with the statue Jose Marti and on the right Camilo Cienfuegos.

Our last stop a very brief one was on the side of a street outside an apartment complex where Steve showed us his favourite sculpture which apparently was created by a man in a wheelchair. 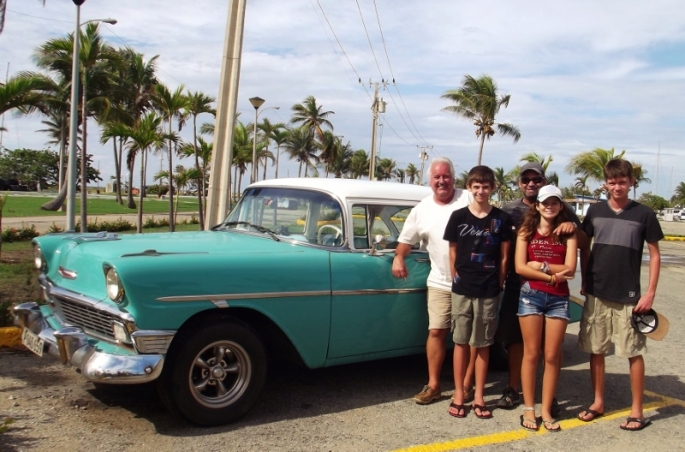 Fellow Australian, Steve our guide and driver who showed us around.

There is so much to see in Havana and not just the tourist sites, Havana is filled with bars, music venues, art workshops and restaurants, you definitely need a few days but we did manage to see a lot during our day there.  If you have time here are a few other ideas of what you could do:

Entrance for locals is free, but for foreigners there is a 5 CUC admittance charge

Map can be bought at the entrance for $1 CUC

Castillo de la Real Fuerza – Built between 1558 and 1577 and complete with a moat.  We did not visit the Castillo itself but it is now home to a museum that houses the history of the fort and town as well as shipwreck artefacts.