“Never hesitate to go far away, beyond all seas, all frontiers, all countries, all beliefs.”

St George Island is the birthplace of Bermuda.  In 1609, an English boat, Sea Venture, ran aground on a reef off of St George Island, those aboard came ashore and claimed Bermuda for England.  By 1612 the first settlers arrived to the town of St George. St George is considered the earliest continuously inhabited English settlement in the western hemisphere.

St George is now a UNESCO World Heritage Site and its narrow streets have many brightly painted stone and masonry buildings dating from the 1600s.  One thing we have noticed is the locals are incredibly friendly, everyone greets you and if they see you looking at something, they will stop and tell you about it.  St George’s has a relaxed, laid back attitude and reminds me of a seaside English town.  The local’s accents are very distinct, not English and not American, but their own unique sound, for us a bit reminiscent of St Helena.

After a day of rest from our passage to Bermuda, we enjoyed a cooked breakfast before exploring St George Island, Bermuda.  With me as the tour guide and a map in hand, the kids were sure we would get lost, lucky Andrew brought his phone with some downloaded maps.

We began our day in King’s Square which has the beautiful Town Hall.  We wandered in to have a look and one of the friendly locals told us that it is still where the meetings are held and the old fashioned cedar desk is where the minutes are still recorded.  Nearby the town hall is the stocks and whipping posts which are replica of those used in the 18th century for punishment for petty crimes.  Max and Andrew readily had a try in the stocks, alas there was no rotten fruit or vegies available to throw at them.

On our way to Gates Fort we stopped at the unfinished church, its purpose was to replace St Peter’s Church and would seat 650 people.  The construction began in the 1870s, but stopped on numerous occasions, after the congregation split and later when a hurricane devastated a church in Hamilton, the funds were withdrawn.  So although it was very nearly completed by the 1890s, it was finally abandoned when they decided to expand St Peters instead.  So you can view the gothic structure’s exterior which is slowly being inhabited by palms but the interior is closed as it is structurally unsafe.

We continued on our walk past Somer’s Garden, dedicated to British Admiral Sir George Somers who was the first to arrive in Bermuda in 1609 and claim the island for Britain.  After his death, his heart was buried in the garden, while is body was returned to England.  Morbid story, I know. 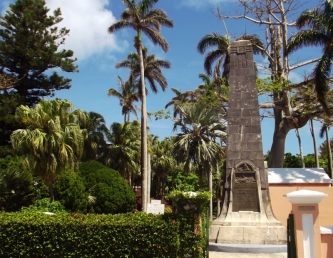 Gates Fort was built in 1612 at the end of town cut, a channel that was cut through the rock to allow boats to enter St George’s harbour.  The Fort was constructed for the purpose of stopping enemy ships from entering the harbour.  The fort was named after Thomas Gates, who was one of the men who was shipwrecked on the Sea Venture and settled and governed Bermuda prior to continuing on to Jamestown, Virginia.   Over the centuries the fort has served as not only a look out, but also as soldiers keep and a local family’s residence, before returning to the government. Two of the original George III guns are still mounted at the fort and there is a rickety, narrow staircase that leads to the top of the fort, with a beautiful view overlooking the reef. 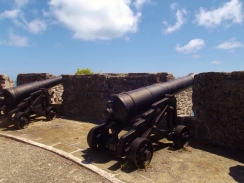 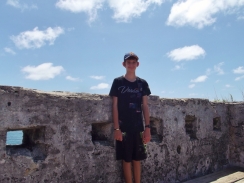 A short walk further down the road leads to Alexandra Battery, built in the 1840s to support other fortifications to stop enemy ships attacking St George.  The battery is also positioned where the boat Sea Venture was shipwrecked in 1609.  Tristan and Andrew found the guns very interesting, I thought it was so so. There is a little bay beside the battery, which all the guides say is littered with sea glass.  I had packed a plastic bag for the kids and they found some, but the beach has been well and truly picked over by tourists. 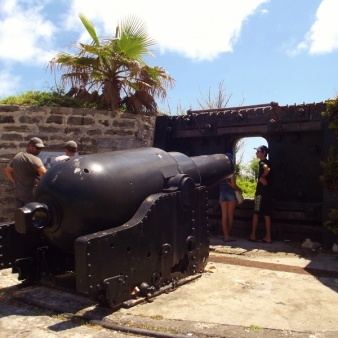 We walked back to the dock, passing all the beautiful coloured buildings with their white roofs.  So why are all the roofs white and almost like a step pyramid in design?  Well I had to find out.  It turns out that Bermuda has very little fresh water, so the first settlers had to come up with a way to harvest water. Early settlers paved the hillside to collect water, they also shaped their roofs with the steps down to gutters which are piped to underground cisterns.  The roofs are made of limestone blocks and painted with a white cement wash compound which helps sanitise the water while keeping the house cooler.  There is now building regulations to ensure that roofs are designed to maximise water collection and ensure houses are self-sufficient with water, as there is no mains water in Bermuda. Very eco-friendly.

This morning we set off for the kilometre walk to Fort St Catherine, located on the northeastern corner of St George Island.

Fort St Catherine was built on a rocky outcrop in 1614, but was subsequently expanded five times over the following centuries.  After walking over a timber drawbridge you enter the museum, filled with dioramas of the fort, suits of armours and replicas of the crown jewels; crowns, sceptres, orbs, swords.

You leave the air-conditioned museum down the steps into a labyrinth of tunnels below the fort that housed the barrels of explosives, casemates and shells in various rooms.  Some of the pulley systems to lift both the casemates and shells which way up to 200 pounds, still exist so you can see how they would winch them up to the top of the fort. 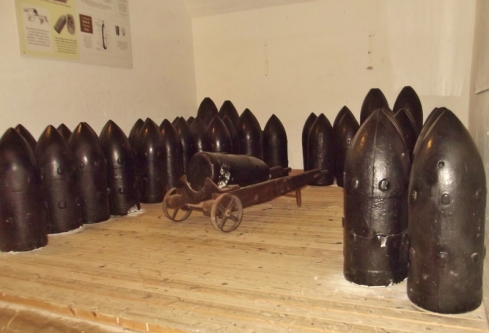 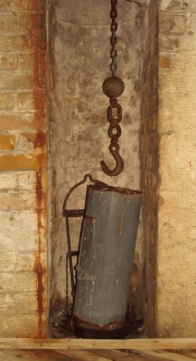 We then wandered around the ramparts, the keep and other nooks and crannies around the fortress just waiting to be discovered. 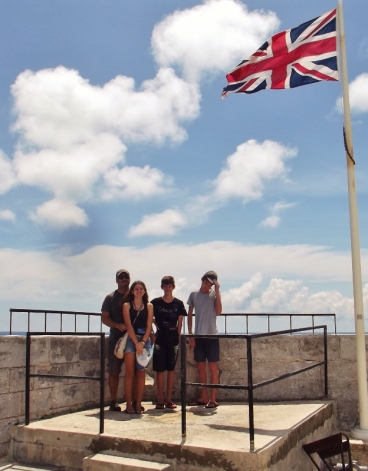 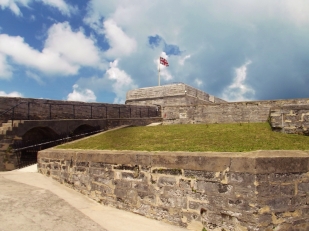 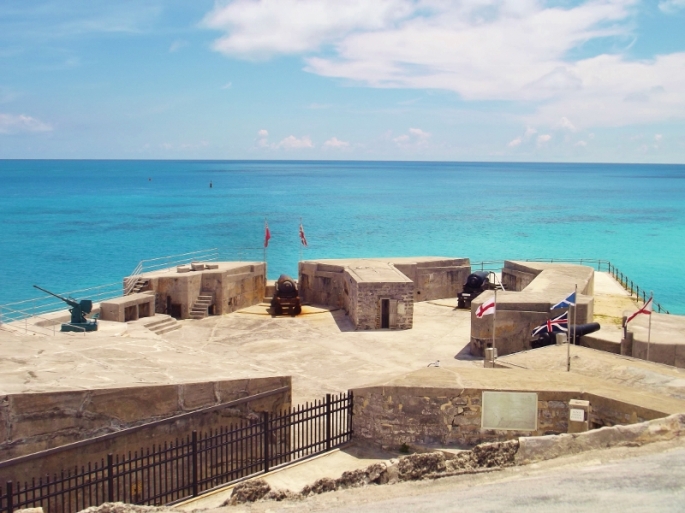 Not a bad place for a soldier to work with an outlook like this. 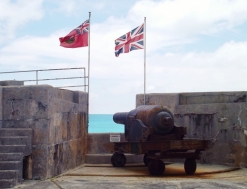 Our walk back to St George’s took us past some beautiful bays and back through the town. 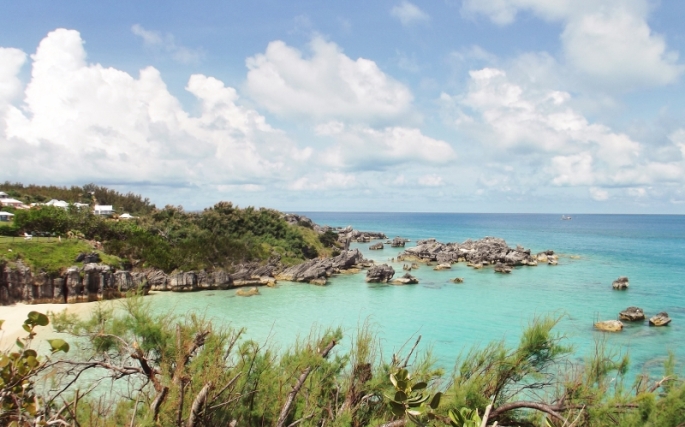 Our next stop was St Peter’s church, rebuilt in stone in 1713, on the site of Bermuda’s earliest church.  St Peter’s is the oldest Protestant church in the New World and inside it has elaborately carved cedar furniture, thought to be the island’s oldest. Outside there are two graveyards, separated by a low wall: the eastern graveyard was for notable Bermudians, while the other side is the final resting place of slaves and free blacks, right up until the outlawing of segregation in the 1960’s.

After our walk and visit to the fort we asked the local pharmacy where the locals go for burgers and were directed to where chef Wesley works at Mama Angie’s.  We did have great burgers in this very small, but packed cafe. 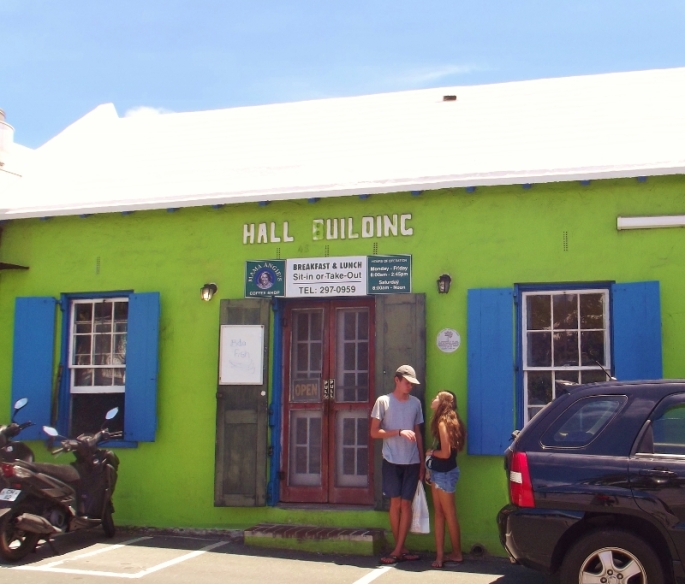 On our return, the dinghy dock was once again packed and we had to clamber over dinghies to reach our own.