Machu Picchu, also referred to as ‘The Lost City of the Incas’ is situated at 2430 metres above sea level.  Historians believe that Machu Picchu was constructed during the rule of Pachacutec in the mid 15th century and possibly used as a winter retreat from Cusco’s cool weather.  Machu Picchu receives over 1 million visitors annually and has been a UNESCO World Heritage Site since 1983, as well as one of the seven wonders of the new world.  The site was first discovered in 1911 by Hiram Bingham, an archaeologist at Yale University who inspired the character Indiana Jones.

Despite having slept in the most comfortable bed in Peru, Andrew did not sleep well and was most definitely not feeling well.  So although having organised to catch the 5 am bus to do a morning hike up to the Sun Gate, we had to cancel so Andrew could recover.  Luckily Andrew rallied and we managed to catch the but by 8 am, I was beginning to think we were going to miss Machu Picchu and after planning this trip for 20 years it would have been a little disappointing.

One advantage of having been delayed was that instead of an hour wait to catch a bus from the town to Machu Picchu, we only waited about 15 minutes.  Driving a bus up the mountain is definitely not for the faint hearted with sheer cliffs that drop off into deep ravines below and a single lane dirt road filled with pot holes.

On arrival, we had a final bathroom stop (there are none at Machu Picchu and we were going to be there 6 hours) and a security check, we were finally making the slow climb to the top.  Okay so we were both still struggling with the altitude despite the fact that Machu Picchu is lower that Cusco and made frequent stops to catch our breaths.  But the climb was so worth it when you get your first glimpse of Huayna Picchu .  Its amazing after wanting to see a place for so long and building it up in your head that it can still exceed your expectations.  Unfortunately neither words or photos can truly enlighten a person to the wondrous sight that meets your eyes when you first see Machu Picchu.

We had some free time so we wandered around and took lots of photos.  Who knew you could take photos of Machu Picchu from so many different angles.

There was only so many photos I could take until Andrew had, had enough so I left him sitting down enjoying the view without my constant clicking, while I took the opportunity to walk to the Inca Bridge. The walk wasn’t particularly strenuous or that exciting really.  Before you ask, no you can’t walk on the bridge, definitely not safe. The bridge was interesting, but I probably wouldn’t bother to do it unless you have loads of time.  Surprisingly I returned to where I left Andrew and he was still there. 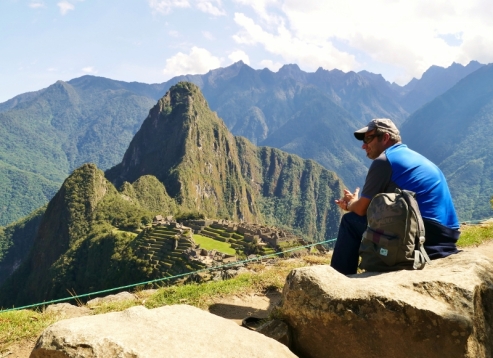 With more time to kill before meeting our guide I took a few more photos of Machu Picchu, you can never take enough, before wandering around the site some more.  There are a lot of llamas wandering around and we had one nearly walk right into us.  There seems to be a spot below the caretaker’s hut that the llamas congregate and they seem to be okay with you patting them, I tested the theory and still have all my limbs. 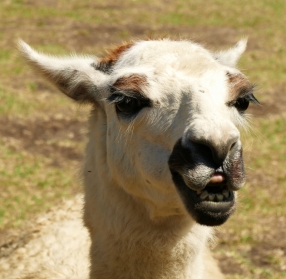 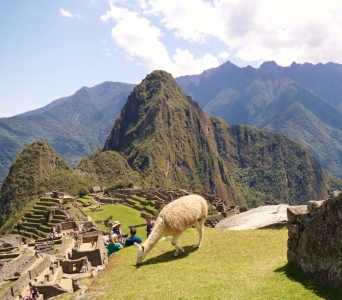 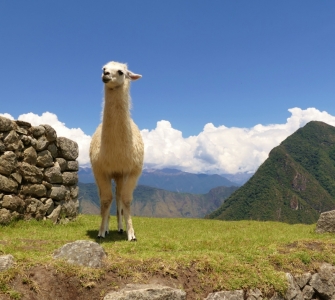 Although they may look like the same llama there are in fact three different ones in these photos.

We met our guide at the caretaker’s hut, where he gave us some background information on Machu Picchu before taking us down to visit the Inca buildings.  Our first stop was the Sun Temple, which could only be entered by the priest and the Inca.  The priest was in charge of performing the rituals and sacrifices on the stone that formed the altar in the temple and would read the stomach and lungs to see the future and hopefully prevent any disasters.  Hiram Bingham who discovered Machu Picchu concluded that the two windows in the main building were used to predict the winter and summer solstices and to make decisions on when to harvest using the sun’s movements and positions of the stars at night.

Our next stop was the Temple of the Three Windows located in the Sacred Plaza.  The windows overlook the mountains surrounding Machu Picchu and are aligned with the sunrise.  I love the way the window frames are cut so perfectly they fit like a jigsaw puzzle and still stand hundreds of years later without mortar.

Close to the Temple of the Three Windows is the Principal Temple or the Main Temple.  Archaeologists believe this temple was a public temple and due to its size was probably used for large ceremonies.  Soil movement has caused the blocks within the temple to shift and one corner of the temple to sink, as can be seen in the photo.

The interesting thing about Peru and Machu Picchu is the ingenious Inca design of their buildings, which have enabled so many to withstand earthquakes and heavy rain.  There techniques like having slanted walls and the use of trapezoidal windows have created structures that have stood the test of time.  Its believed the houses did have steep roofs with in built drainage systems, which again suits the climate as it rains a lot in Machu Picchu.

Interestingly enough within the building complex are haphazard piles of large rocks some weighing up to 50 tonnes.  The rocks are the remains of a quarry.  The Incas created their own blocks from the rock in the mountain rather than transporting them in.

The main plaza was particularly important to the Inca aristocratic class and was used as a sanctuary and where the inhabitants could congregate and attend events, rituals and celebrations.

The Sacred Rock is located in the Central Plaza or the far end of Machu Picchu.  The Sacred Rock is a monolith reaching to 3 metres in height and 7 metres in width. Most Incan villages contain a sacred rock which is usually dedicated to a site prior to constructing the village. The exact purpose of the rock is speculated about and has many theories, the one I like is that the rock is modelled on the Cerro Pumasillo, the mountain behind the rock and that it is orientated to some type of astronomical alignment.  It makes sense it is almost identical shape to the mountain. 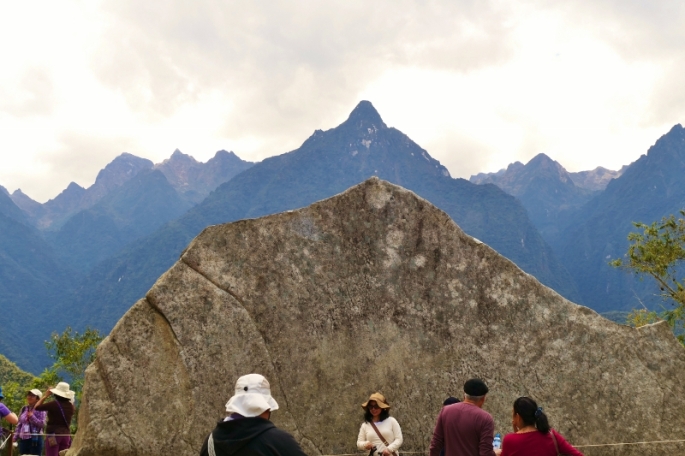 As you leave the city the view behind you is amazing, with the inca buildings and Huayna Picchu soaring behind them at 2, 720 metres.

Exiting the city of Machu Picchu takes you across sweeping terraces that once grew crops like corn or maize, potatoes and quinoa.  At the end of the terraces are the granaries with reconstructed roofs.

After six hours spent at Machu Picchu we were both ready for a drink and to sit down on the bus on the way back down.  Well we got the drink, but had to wait 45 minutes in a horrendously long queue to get back down.  We were extremely fortunate as the weather had been hot and sunny during our visit, no sooner had we sat down on the bus then it poured with rain, for hours. 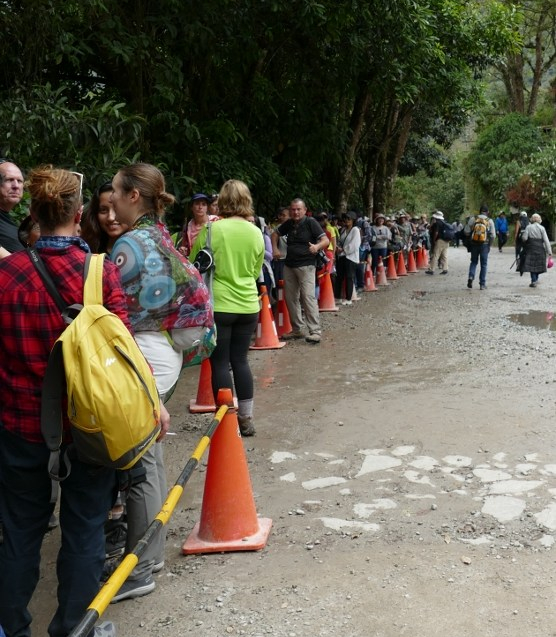 We had a long lunch to kill some time before we caught the Peru Rail train back to Cusco.  It was nearly a three hour journey back and we were both very glad to get off the train.

Tickets for Machu Picchu can be purchased online at their website and its advisable to book in advance particularly from June to October.  The ticket price varies according to what options you choose from hiking Machu Pichu or Huayna Picchu (both have a limited number of spaces available) or visiting the museum.  The following website can give your more information: https://www.ticketmachupicchu.com/

There are two trains that service Machu Picchu, the prices vary according to both the time of day and the class of seating you choose.  The websites below will give you more information: