We did an afternoon tour with a small local company, Chacras Travel, which is run by a Peruvian local, Isaias.  Isaias picked us up from our hotel and took us for an afternoon trip in his air-conditioned car firstly to the Maras Salt Mines and then to Moray. 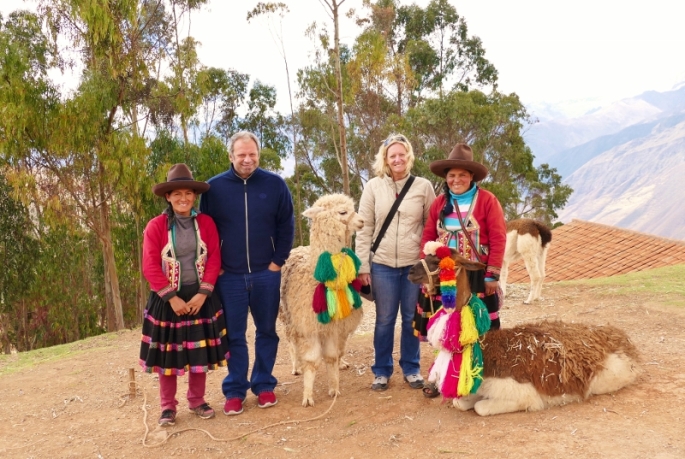 We stopped on a hilltop on route to the salt mines and had the obligatory photo with the llama ladies.

The approach to the salt mines overlooking the Urubamba Valley

The Salineras de Maras (Maras Salt Mines) are set amongst the hilly landscape of the urubamba Valley, about 40 km from Cusco.  The salt pans have not changed since they were established in the Inca times or perhaps even earlier.  The salt mines are made up of a series of salt crusted terraces which are fed by the trickle of mineral rich water. The polygon shaped plots vary in size from about 4 – 10 square metres and a depth of 10 to 30 cm.

The salt that is harvested is apparently some of the best in the world.  How do they get salt mines up in the mountains you may ask?  Apparently the water is naturally salt infused and as it flows down the mountains and channeled into the pans where it settles.  The water is allowed to evaporate, leaving the salt behind, which is then collected and sold.

There is a tourist path around the top of the terraces allowing a view below of both the terraces and the people working them.  The plots are worked by both men and women of all ages, doing the backbreaking work of harvesting salt on their small family plots.  The harvested salt is piled into pyramids around the pond edges until its bagged for sale. Our guide, Isaias tell us they are paid fairly well, by Peru standards, but the price they pay is calloused hands, bent backs and parched faces.  The family plot passes from the parents to the children.

As you leave the salt pans there are some small shops where the vendors sell a variety of items that incorporate the salt with herbs for cooking, for bathing and even in chocolate bars.

We continued west of Maras to reach the Incan ruins of Moray, situated in the Sacred Valley.  The Moray site is made of three circular depressions, each with a series of concentric circular terraces.  The largest of these depressions is approximately 30 metres deep.

Although the circular terraces resemble a Greek or Roman amphitheatre, it is believed that they were an Inca agricultural laboratory. Each of the terraces have their own unique micro climates with differing temperatures, wind and orientation to the sun.  In fact the temperature between the top and bottom terrace can vary up to 15 degrees Celsius.  These natural depressions allowed the Incas to create Andean, jungle and semi-tropical environments suitable for a range of plant varieties.

Soil studies have also revealed that the terraces differ in the type of soil they contain.  The theory is that soil was transported from different regions of the Inca empire, ranging from the Amazon rainforest to the coast, to be used in the Moray terraces. Seeds from the Incan empire were also likely to have been sent from different tribes to the Moray site for cultivation.

The purpose of the soil and micro climates was for the Incas to study the best conditions to grow a wide range of crops from around the Inca Empire in the Andean environment and possibly share this information with farmers in the region. The fact that over 60 percent of crops have originated from the Andes, which includes thousands of potato varieties and hundreds of varieties of maize, makes the possibility of this having been a research station quite believable.

The circular agricultural terraces are constructed with rock retaining walls and have built in irrigation systems.  So far the lower terraces have never flooded, even after excessive rainfall, it is assumed there are underground channels underneath the depressions to drain the water away.

On our route home, Isaias stopped for a toilet break and there happened to be a couple of local ladies chatting while their llamas were grazing.  Not a bad grazing spot with the mountains in the background. 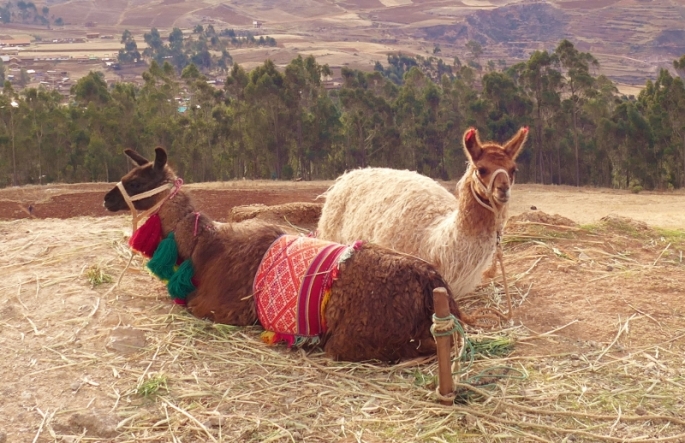 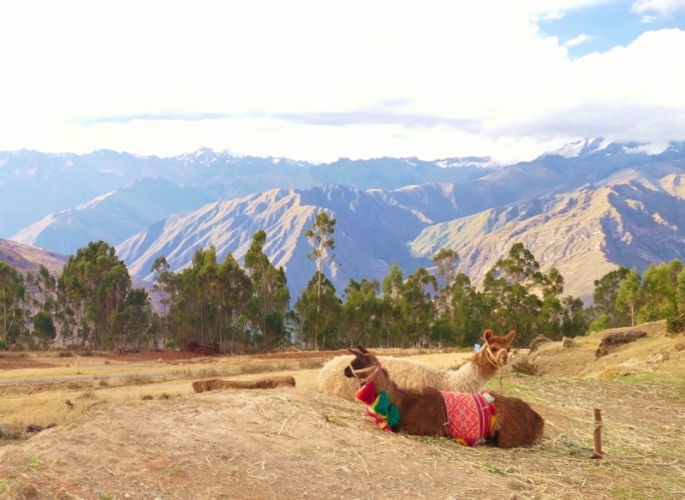 Chacras Travel only does private tours, but can accommodate large groups and Isaias price was a bit negotiable.  The advantage of a small tour is that it can be customised and we were able to visit the sites in the afternoon, rather than the morning when most of the larger companies visit, so it was less crowded.  I liked that it was a local running the company, rather than one of the large tour companies in Cusco owned by Americans, Australians or Germans.  For more information on the tour company see their website: https://www.chacrastravelperu.com/tour-moray-maras-salt-mine-cusco/