El Escorial or as its officially known, Monasterio y Sitio de El Escorial en Madrid, is a royal city.  The Royal City is composed of a monastery, an official royal residence and a basilica.

One of the most impressive rooms in El Escorial is most definitely the library.  The room’s vaulted ceiling is adorned with beautifully painted frescoes and is filled with thousands of rare and old books and globes.  What Andrew found interesting was that instead of storing the books with their spine facing outward, they were in fact stored with the pages facing out.  This has led me to find out why books were stored that way.  It turns out it allows the pages to breathe better and as the gold leaf on the page edges repels bugs, it therefore preserves the books better.

We visited the basilica and although it had painted ceilings it seemed somewhat plain in comparison to others we have seen in Spain.  From the Basilica we wandered through the monastery before seeing the chambers where the kings, emperors and their families have been buried from the last 500 years.  The kings and their wives had a special chamber, reached by descending a long staircase and appeared to made of dark marble .  The Kings were entombed on one side and the wives on another. 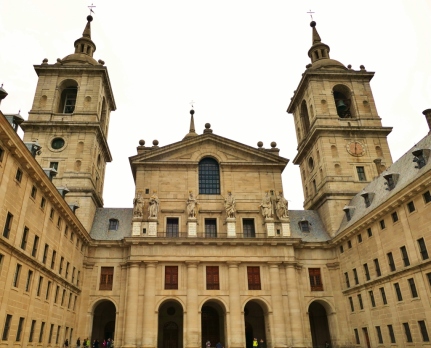 Entrance to Basilica and Monastery 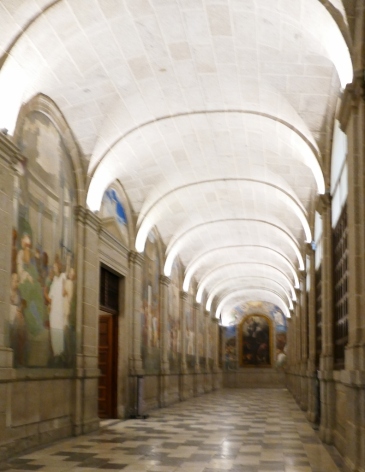 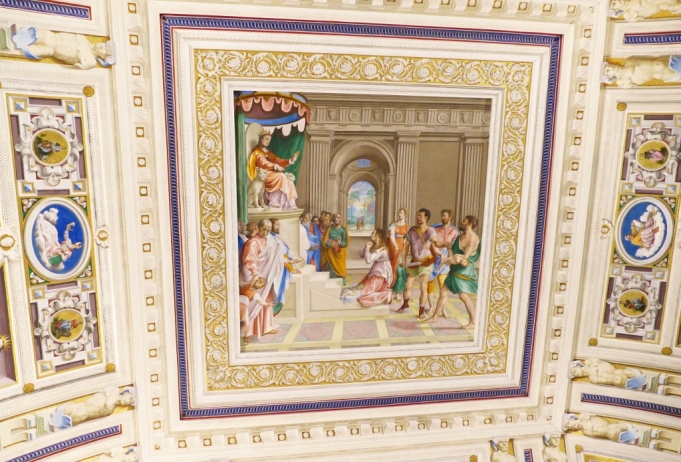 Max and I wandered through the Royal Palace of the Bourbons, which is richly decorated in tapestries, apparently to help insulate the rooms in the winter time.  What we found really interesting was the shallow metal bowl shaped dishes in most of the rooms.  Max guessed they were for fires and after asking one of the security people, she told us that he was right.  We did see one fireplace but I think that was it.  I wonder if that was the cause of one of the fires they had there.

Carrying on from El Escorial, we headed through the mountains to a wonderful viewpoint of El Escorial and its town.

We continued on through the mountains and windswept plains to reach the medieval walled city of Avila.  Although a modern town obscures part of the walls of the old town, there are still plenty that remain as they did in the middle ages. 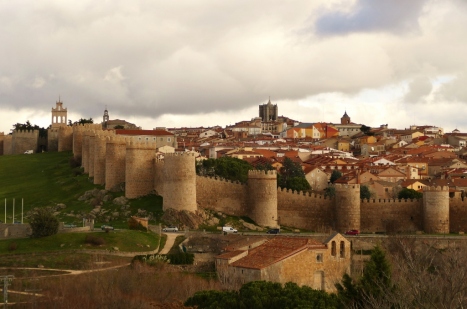 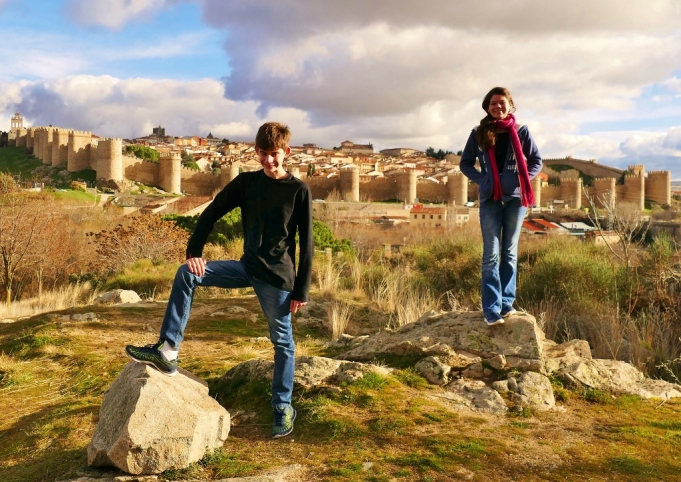 After the Christians conquered the Moors and retook Avila, the son in law of Alfonso VI, Raimundo de Borgona had rectangular shaped walls constructed around the circumference of the city, for defensive reasons to prevent Avila being retaken. Construction of the 2 557 meters of stone walls with crenelated towers and round turrets every 20 meters to observe invaders, as well as 9 entrance gates, began in 1090 and took 9 years to complete. The short construction time was largely due to the 1900 men employed to build it.  The average height of the walls is around 12 meters and it is quite a site to behold such a large structure, it certainly looks impregnable.

It was a high of 7 degrees and despite Max only wearing a long sleeved shirt (we were only out of the car for 5 minutes) it was freezing so we opted not to do the self-guided walking tour of the wall, but I’m sure it would be amazing  when the weather was a little warmer.

I have to say in comparison to the other palaces we have visited, this one is not particularly well sign posted and I think we actually missed sections of it. I think it would be worth getting an audio guide for this site or a tour guide.

I’m not sure if we have just seen too many palaces and castles over the last 10 days, but this was probably the least favourite of what we have seen.