Our plan to visit Coca Castle and then La Grandja Palace had to be re-arranged after we set out and discovered the fog was too thick to see the castle, so we continued onto the palace.

La Grandja Palace is located about 11 km from Segovia, (where we had visited a couple of days ago) in a small town called San Ildefonso, which is nestled in the Sierra de Guadarrama. It was Philip V who chose San Ildefonso as the site for the palace and modeled it on Louis XIV’s Versailles.  The palace was built between 1721 and 1739.

As it was winter and mid week, there was plenty of parking very close to the palace.  Walking into the grounds, the first thing you notice is the huge, old trees, which according to signs they range in age from over 100 years to 144 years old.  Behind the trees is the chapel and entrance to the palace.  We opted for an audio guide to tell us the history of the place.

The palace is beautiful with its painted stucco ceilings, exquisite furnishings, superb French, Flemish and Spanish tapestries and of course gorgeous chandeliers.  What I found interesting though was that Philip V suffered bouts of depression and was actually quite reliant on his second wife from Italy, Isabella, to guide his decisions.  The fact that Philip and Isabella didn’t follow royal protocol of having separate bedrooms, but instead had a shared room and paintings which depict Philip looking at Isabella, seems to show a genuine love between the two. 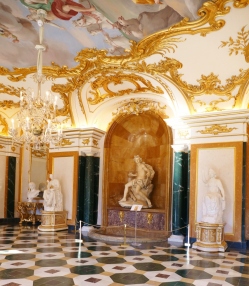 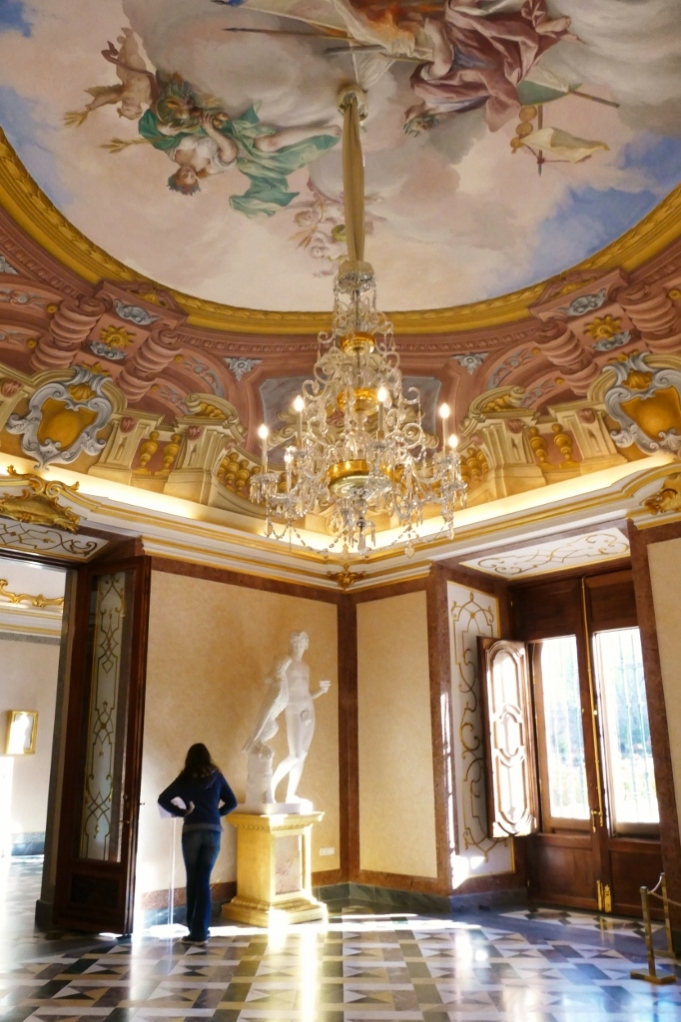 Surrounding the palace are beautiful French style formal gardens.  Unfortunately due to it being winter, the fountains were not running and the statues were covered throughout the gardens, but regardless the gardens are impressive and I can only imagine how spectacular they must be in spring and summer, when they are in full bloom. 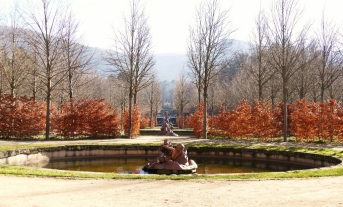 I personally think the palace was wonderful and well worth a visit.  Surrounding the palace is a cute little town, we stopped at the La Chocolateria for a hot chocolate, before having a brief wander through the market which was open while we visited and ending at Dumbo’s pizza restaurant for a late lunch.

Our return trip took us through Segovia and so we decided to make a stop to see the aqueduct, which we had missed on our previous trip.  The Roman aqueduct is believed to have been built during Flavio’s reign, around 50 AD.  The aqueduct stretches 14 kilometers to channel water from the Frio River in the Sierra de Fuenfria Mountains to Segovia.  There is approximately 20 400 granite blocks used in the construction, with little or no mortar used to create the 167 arches that vary in height and adapt to the contours of the land.  We stopped briefly on route into Segovia and then again in the Plaza del Azoguejo for photos. 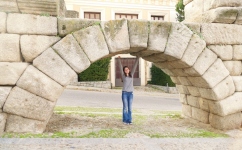 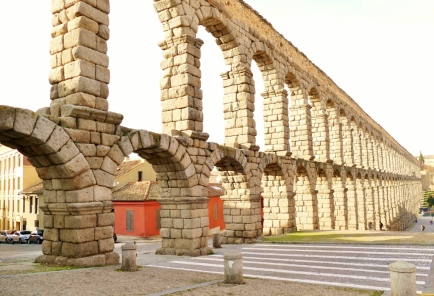 Unfortunately our plan to visit Coca Castle on our way home, was once again thwarted with the return of the fog.  Oh well, maybe another day.

Information on the places we visited:

The friendly restaurant owner has an extensive menu of pizzas, burgers, salads and pasta dishes.  The food was delicious and well priced.

We had delicious hot chocolate and cheesecake and friendly staff.  They don’t seem to have a website but I’ve included the address below: