After three days of sitting inside our mountain retreat over Christmas, we decided it was time to get back on the tourist trail again and what better than another ABC.  We undertook another windy, mountainous series of roads, with a brief stop to talk to our eldest kids, (no internet at the house) before continuing on to Tomar, the headquarters of the Knights Templar Order of Portugal. 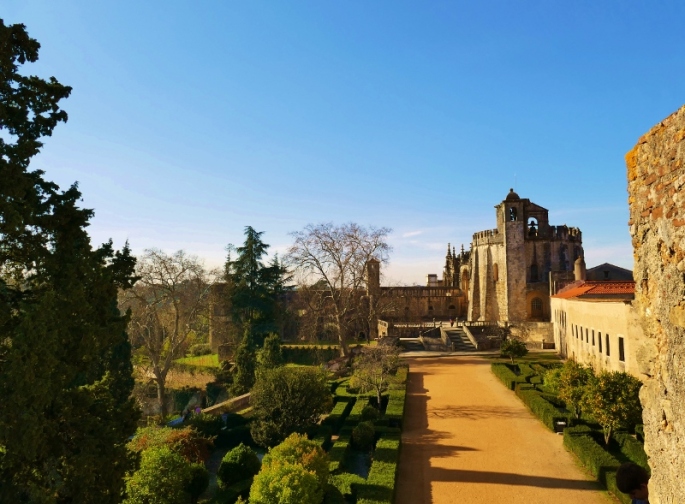 The templars were a monastic order of knights founded in 1112 AD, with the purpose to protect pilgrims along the path to Jerusalem.  The templars came to Portugal during the 12th century at the request of Portugal’s first king, D. Afonso Henriques.

King Afonso Henriques donated the region around Tomar to the Knights Templar, where they built a famed round church, which was patterned on the Church of the Holy Sepulcher in Israel and forms part of the Convento de Cristo Site.  To protect the convent a castelo was built around it, complete with walls and towers, all adorned with the cross of Malta and other secret templar symbols.  At the time the castelo was built it formed part of a horizontal line of castles that stretched along the Tejo River to defend the new nation of Portugal from the Moors.

Although, in 1307 the Knights Templar was dissolved, the Portuguese king D. Dinis made a secret order and created a new religious order, the Order of Christ, which took over all the lands, castles, symbols and power of the Knights Templar.  Under the leadership of Infante D. Henrique, the knights began a new quest on ships carrying their distinctive cross and began the Age of Exploration.

The Age of Exploration led to the riches from the East flowing into the castle of Tomar and resulted in new cloisters being added to the monastery which incorporated symbols of the sea like coral, shells and rope.

You can easily imagine as you walk through the tall gates and first see the round church, that knights on horseback would have ridden through them in the past.  The church rises majestically above gardens of sculpted hedges, grape vines and trees laden with oranges.  After wandering the gardens and viewing the ornate doorways and exterior of the church we paid the entrance fee to go into the monastery and church itself. 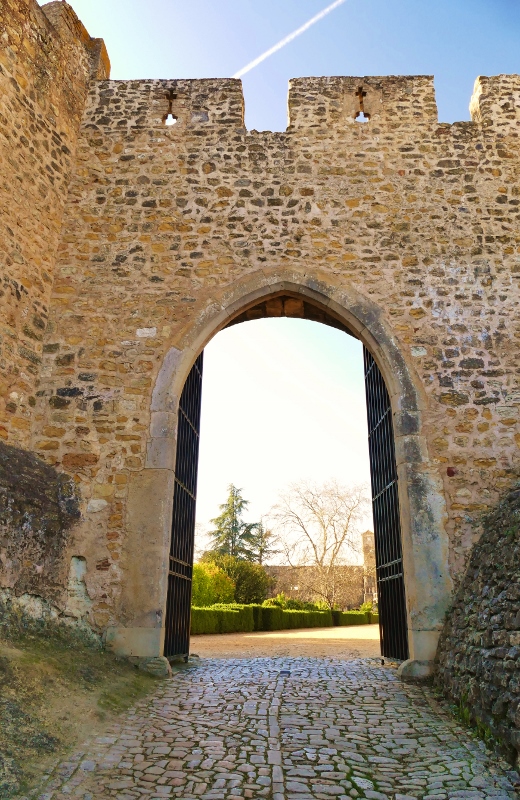 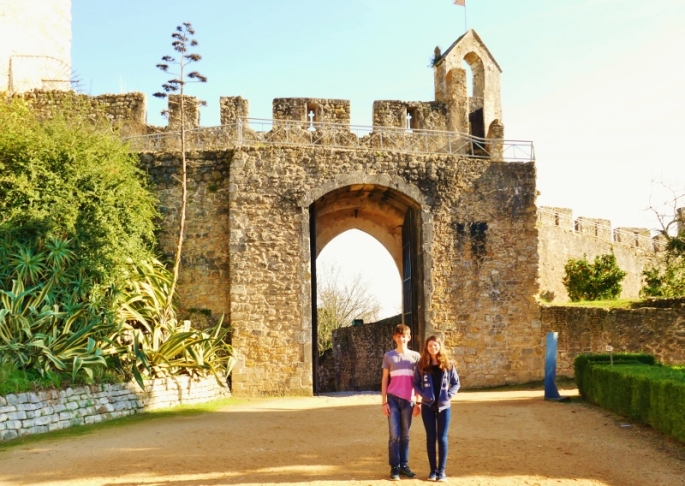 The site is actually huge there are so many cloisters it is easy to become disorientated.  There are some rooms open that you can go in and see where the monks slept and areas where they carried out their daily duties. 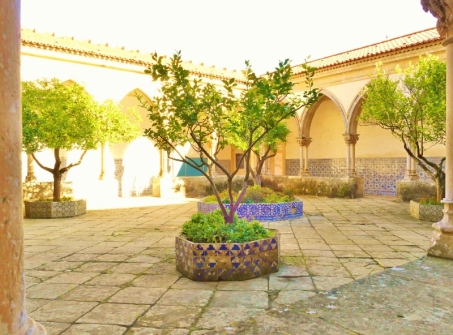 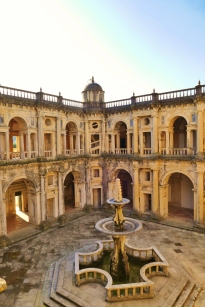 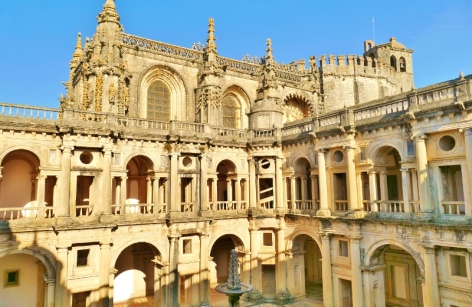 Of course the real attraction is the round church, which does not disappoint.  While I’m not up with the history of the Knights Templar, Andrew, who has read many books on them, enjoyed looking at the church and identifying features and symbols that were specific to the Templars.  The paintings on the walls which were really beautiful were in fact was from the 16th century and from the time of the Order of Christ.  During the templar times the church was actually very plain.  Andrew spent some time talking to a man working there about different features of the site and was able to learn a lot more about both the Templars and the Order of Christ and their relationship to the monarchy. 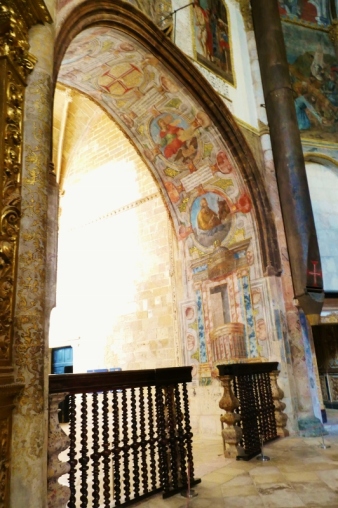 When you leave the monastery, you actually leave the site and end up in the car park.  I was keen to walk along the castle walls, so we actually went back in the main gates and walked along some of the walls.  From the walls you can see not only the surrounding countryside but the new parts of the city of Tomar. 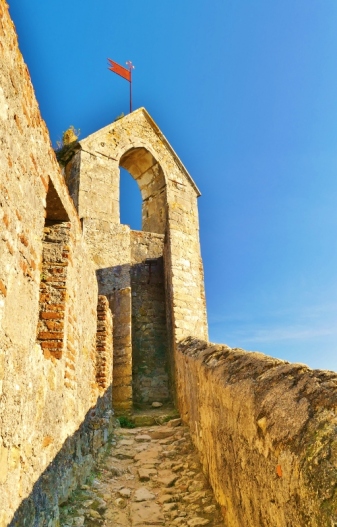 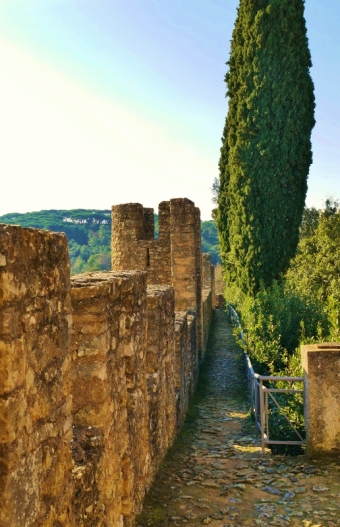 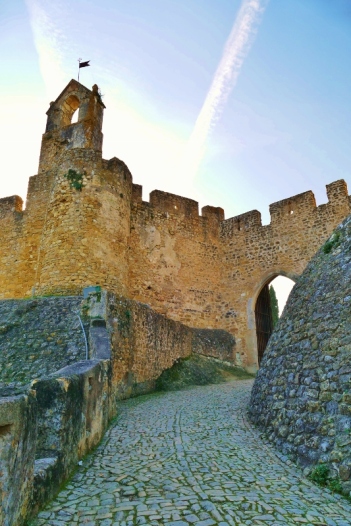 During our en-devour to find a view-spot to see both the Castelo and Church. we did end up at a viewpoint for the Aqueduct Dos Pegoes.  The Convent of the Order of Christ needed a water supply and so in the 1590s, a 6 kilometer aqueduct was constructed to chanel water from four springs at Pegoes to the monastery.  The Portuguese crown hired military architect Filipe Terzio to plan the aqueduct, which took 21 years to construct, although he died before its completition.

The viewpoint is actually where the aqueduct is most impressive, it crosses the Vale da Ribeira dos Pegoes, with two tiers of arches and reaches a maximum height of 30 metres.  There is actually a small staircase which allows you to climb to the top of the aqueduct and where you get an amazing view of its two tiers.

The aqueduct is well sign posted throughout Tomar and they lead to a small parking area where it is free to climb up and see the aqueduct.