Due to time constraints, (a plane to catch) we only had time for brief stop to view the exteriors of the windmills and castle of Consuegra.

Both the windmills and Castle of Consuegra are located on the Calderico Hill, with views overlooking the La Mancha plain. The La Mancha area was the setting for one of the greatest literary works of all time in Miguel de Cervante’s novel, El Ingenioso Hidalgo Don Quijote de la Mancha or in English, The Ingenious Nobleman Sir Quixote of La Mancha. 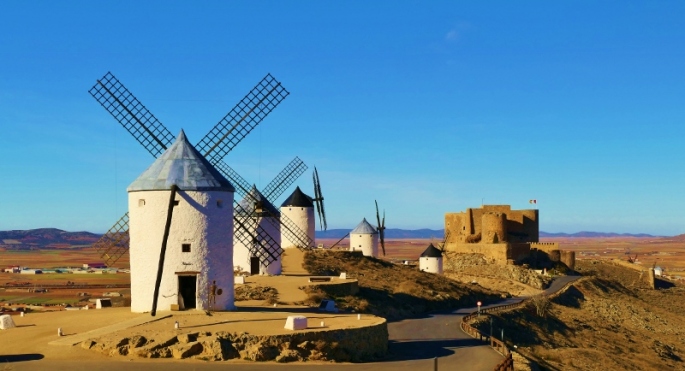 The novel involves the adventures of a noble, Alonso Quixano who after reading many romance novels on chivalry has decided to become a knight with the purpose of reviving chivalry and he assumes the name Don Quixote de la Mancha. The secondary character, a peasant, Sancho Panza, becomes Don Quixote’s faithful squire and joins him on his journey.  Don Quixote is tall and thin, wealthy and well educated, while Sancho is short and fat and an illiterate commoner, they are the perfect mismatched couple.  Throughout the novel Don Quixote give elaborate speeches on outdated ideals of knighthood and Sancho responds to those with popular proverbs and wit, thereby providing comic relief.

One such conversation between Sancho and Don Quixote,

“Look, your worship,” said Sancho; “what we see there are not giants but windmills, and what seem to be their arms are the sails that turned by the wind make the millstone go.”

“It is easy to see,” replied Don Quixote, “that thou art not used to this business of adventures; those are giants; and if thou art afraid, away with thee out of this and betake thyself to prayer while I engage them in fierce and unequal combat.”

This began Don Quixote’s battle with the windmills which he thought were giants.  The windmills in Consuegra are believed to have inspired Miguel de Cervante to write this famous scene in his novel.  The phrase, “tilting at windmills” comes from this scene and basically means battling a foe whether it is real or imagined, for pointless reasons.

Originally there were thirteen mills, today there are 12 restored ones, each named from Miguel de Cervante’s novel; Bolero, Mambrino, Sancho, Backpacks, Vista Alegre, Cardeño, Alcancía, Sparks, Caballero del Verde Gabán, Rucio, Espartero, Clavileño.   The Sancho Mill, has the original working mechanisms and is still used on special festivals. The mills, dating from the 16th century were used primarily to grind grain and were passed from father to son for many generations.  The mills were officially retired in the 1980s.

Two of the windmills, named ‘Espartero’ and ‘Rucio’ from Miguel’s novel

You can understand why they were in a good position if you visit, the wind was whipping through when we visited and it was freezing cold.

You can visit the windmills, one of them houses a gift shop while another is a small museum. There’s even a working mill so visitors can see how it works.