On our drive from Posadas to our new accommodation in Olvera, we had a slight detour to visit Setenil de las Bodegas.  Unable to find a car-park in Setenil, as it was a Saturday and we didn’t arrive until 1 pm, we parked in the neighbouring village and walked down.

A troglodyte dwelling in front of where we parked

Setenil de las Bodegas is one of Andalusia’s troglodyte or cave dwellings villages with about 3 000 residents.  These caves have been enclosed and give the appearance that they support the rock, unlike other troglodyte villages where the caves have either been extended or have extruding chimneys.

Setenil is first mentioned in texts around the time of the Phoenicians, however, as the nearby Cueva de la Pileta caves with the cro-magnon drawings dates back 25 000 years, it is likely that Setenil has been around thousands of years.

Setenil was initially used as a warehouse to store goods that were traded through out the Roman Empire until its fall in 496 AD when the warehouses were converted into homes and the town was largely ignored. After the Christians fought the Moors for 15 days at the nearby castle, eventually defeating and removing them, Setenil developed as an agricultural base growing almonds, wine and olives.  Although wine grops were wiped out in 1860s due to insects there remain roof top gardens growing both olives and almonds.

Today most of the Cave dwellings in Setenil house shops, bars and restaurants, although a few remain as homes.  In fact where we parked our car in the next village there were two houses in front of the park that existed as homes. 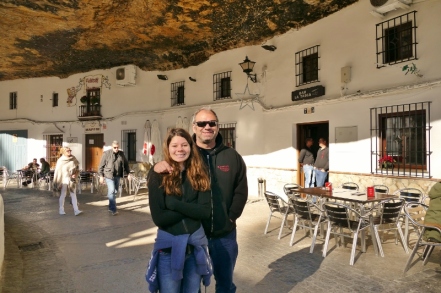 Walking around Setenil, the town still had a lot of their Christmas decorations up and I was quite impressed with the ingenuity of the house below.  I love the recycled reindeers made of water bottles, oil bottle and yogurt containers for decorations around its neck.

The landscape in Andalusia is beautiful.  I particularly loved the drive from Setenil to Olvera.  The town of Olvera is gorgeous with its church and castle set on two high points and the white homes below

We decided eat out tonight, although the kids opted to stay home and eat left over soup.  The restaurant sits in the main plaza, in the shadow of both the cathedral and castle.  We enjoyed a delicious meal of bull tail stew, followed by dessert, the kids missed out.

As we were leaving the parade through the main street of town for the Three Kings started.  We joined the crowds and watched as tractors pulled trailers of adults and children dressed as kings and angels who threw candy at all the excited spectators and marching bands and dancers filled the street.  It was a fun experience and I wish we had of made the kids come, but we did collect some candy for them. 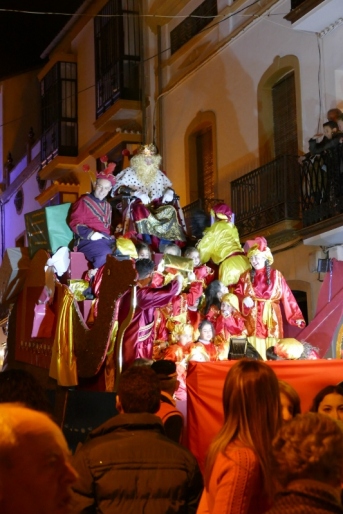 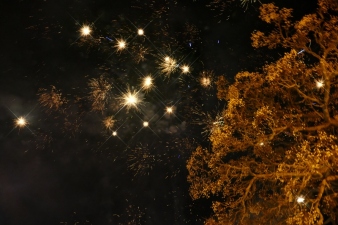