“Life is a journey. Make the best of it.”

Prior to our trip I had read many blogs on the border crossing between El Salvador and Guatemala and I have to say our experience was easy and very uneventful.  We drove a car that we had hired in El Salvador and paid $25 for the hire car company to type up a letter to take with us to Guatemala where we crossed the border at Pedro de Alvarado.  On the El Salvador side we had to show the papers for the car and attend the immigration office.  On the Guatemala side we just went to the Immigration office.  The whole process took 15 minutes and required us to fill in no paperwork.

The roads through Guatemala and near the coast of El Salvador were pot holed and a mixture of dirt and sealed.  The potholes were often large and you would unfortunately often not see them until it was too late.  We did have some problems with Google maps through both countries, where the instructions would say turn right and in fact the map said turn left.  Other things we found was that it was directing us up one way streets or streets where a car could not possibly fit.  Finally the major problem and you really need to check it in your planning, is that google maps will take you on the shortest route.  This route may also be the one that is unsealed, windy and the locals rarely use.  We found ourselves many times on the fastest route with very few other cars and bumping along on a jaw rattling ride and being surprised that the car made it intact.  In fact we did stop to check if we had a flat tyre on one occasion but it was just the road.  But all that being said, google maps is free so you can’t complain too much. 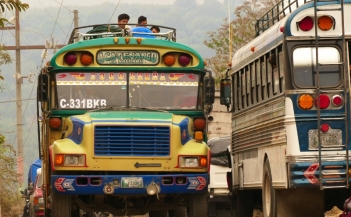