We couldn’t make up our mind whether to visit Lake Atitlan, which was expecting afternoon rain or Pacaya Volcano which was covered in cloud.  We ended up deciding to book a nights accommodation in San Pedro, on Lake Atitlan and go for the night.

So began our windy drive along pothole ridden roads which became not only steeper, but more and tighter switchbacks, the closer we came to San Pedro.   Nevertheless the drive did provide us with a beautiful, if not cloudy view overlooking the mountains, little towns with women in the traditional Mayan dress and roadside stands selling pots, wooden carved giraffes and other trinkets. Once we reached the lake we passed a couple of small Mayan villages all with murals painted on the walls, unfortunately I only managed to snap a few pictures, but they were lovely and incorporated the local environment or people. 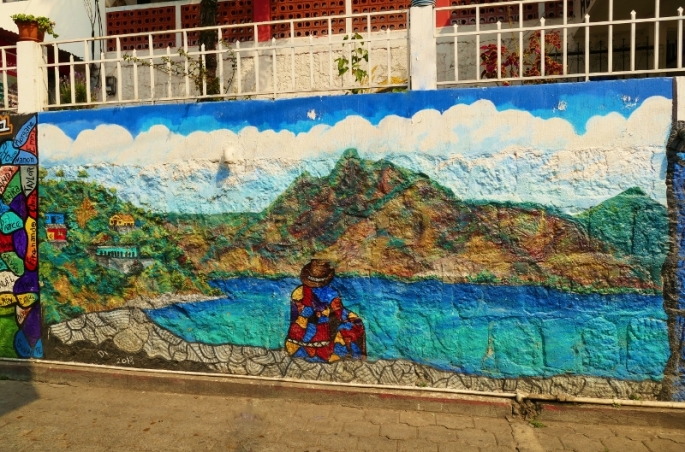 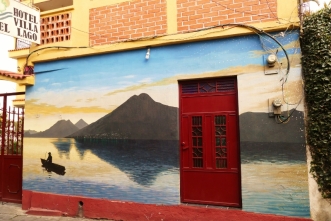 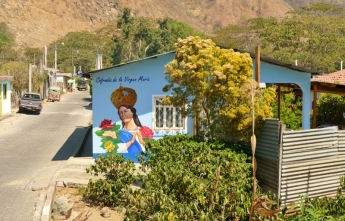 The challenge of the day turned out to be finding a way to reach our hostel.  It seems google maps was either trying to direct us down a street that a car would definitely not fit, the wrong way down a one way street or through the street with no entry because there was a market.  Andrew grew more frustrated as we drove round and round the tiny, steep streets to no avail. Eventually we asked a tuk tuk guy if he would show us to the hostel and we would pay him a tuk tuk fee.  That seemed simple enough, but it did require him having to ask a few other people how to get to the hostel first.  We did eventually get to there thanks in part to the tuk tuk driver and also because the market had closed and the road reopened.

We spent some time wandering the main street of the tourist area and down along the lake watching the locals wash their clothes, rake the sea weed out of the water, bathe and the kids jumping off a jetty.  As the town is primarily filled with back packers the restaurants and bars are substantially cheaper than Antigua.  It definitely had a more hippie feel than Antigua with many of the tourists sporting dreadlocks, gauges, piercings and tattoos. 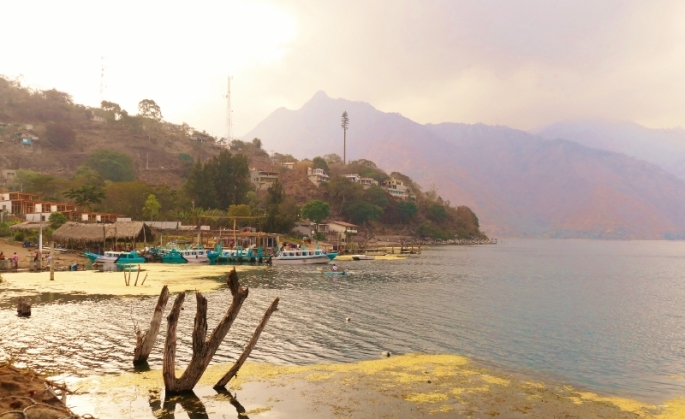 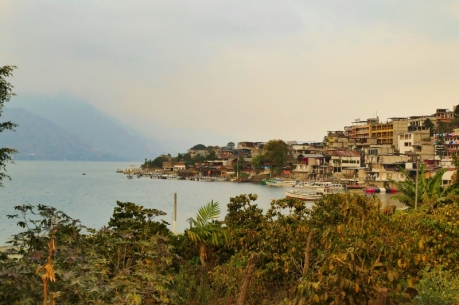 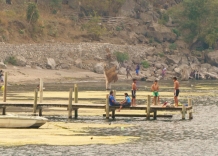 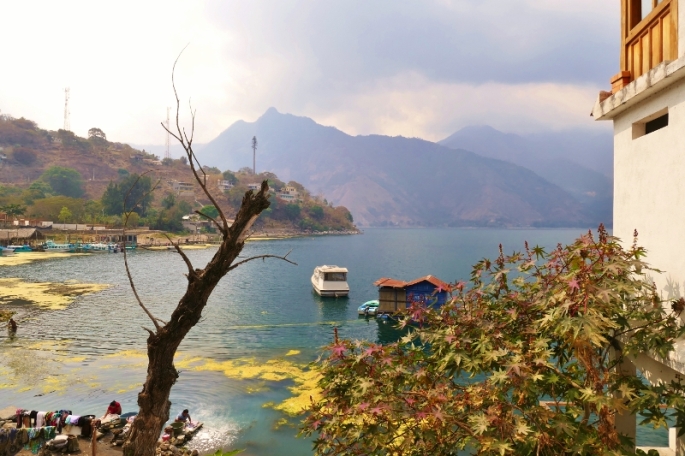 It was my dinner choice tonight and we ate at the Garden Restaurant, because I saw a pizza over earlier.  Unfortunately the pizza oven was not in use, we were the only ones there and the food was very ordinary, but the lady owner was lovely.

After days of clouds, we began with cloudless, sunny skies and beautiful views of Lake Atitlan.  For the first time since arriving in Guatemala we were able to view the volcanoes for which the country is famous.

The first thing we could see from our bedroom window was the Indian nose.  Locals now refer to it as the Mayan nose as their rich heritage comes from the Mayan Indian and not the north American Indian.  Its name originates from the profile of the mountain which depicts the face of a sleeping Indian an the viewpoint is on its nose. There is a hike to the viewpoint which begins at 4 am, which we did not do.  But you can clearly see the Mayan Indian profile from anywhere in San Pedro. 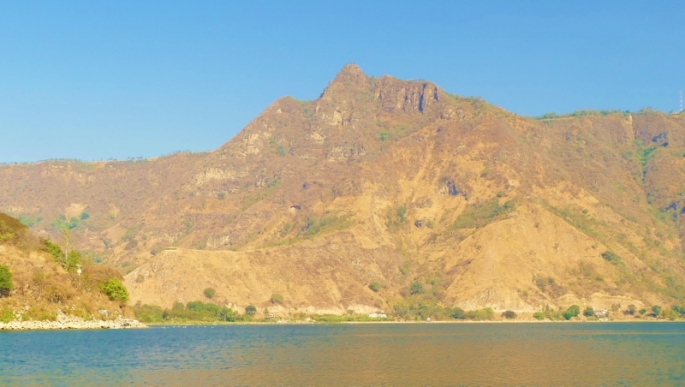 We began the morning with breakfast beside the serene view of the lake enjoying the slow hum of activity, the occasional boat crossing the lake and the very few tourists awake yet.  We also enjoyed watching the smoking of a volcano across the lake, which kept us entertained for a long time, or at least Andrew and I. 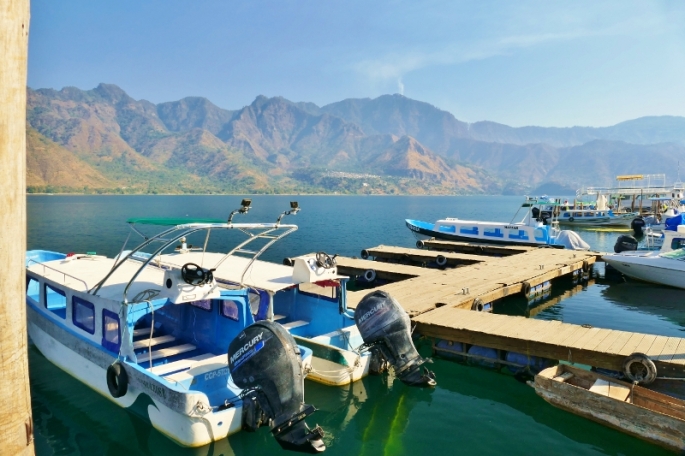 The view to the right of the restaurant where we ate breakfast. 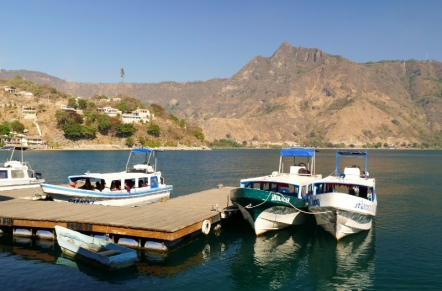 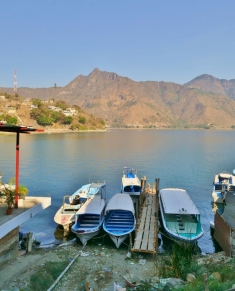 The view to the left of the restaurant.

We decided to go for a drive around to San Marcos, the hippie tourist town which afforded us a lovely view of San Pedro Volcano. 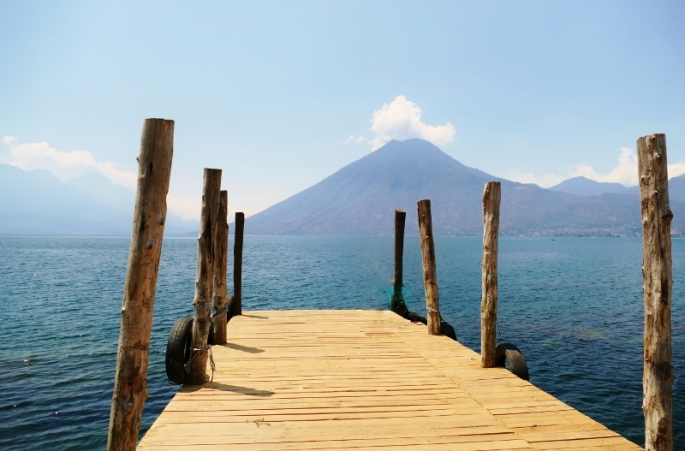 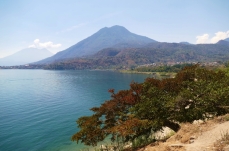 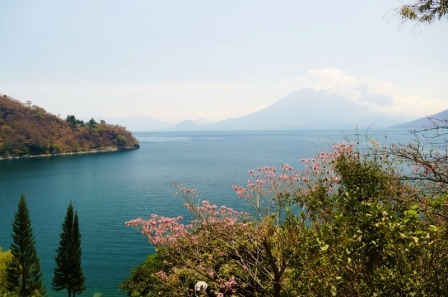 The manager of our hostel, a back packer told us that Volcano Fuego in Antigua was very active and they were worried it was going to erupt.  So we decided on a return trip to Antigua we would see if we could view the erupting volcano from a nearby town.  It was an adventurous drive to reach the caldera, one section of road was in the process of being graded and we along with a bus, cars and motorbikes, slipped and slid our way up the steep hill.  Google then decided to take us on another shortcut up a very steep incline of paved, dirt and potholed roads, before ending up back behind the buses who had taken the smart route. 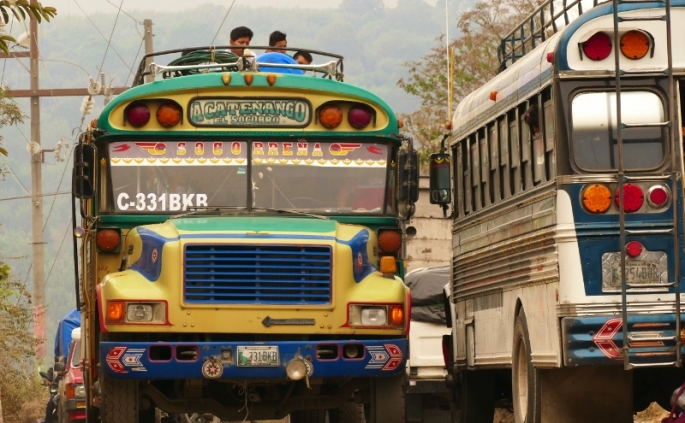 It appears the luggage racks on the chicken buses are not only for luggage but also teen boys. 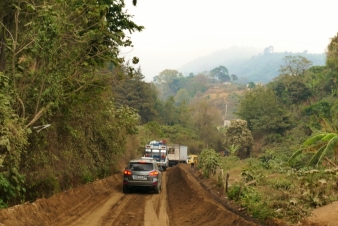 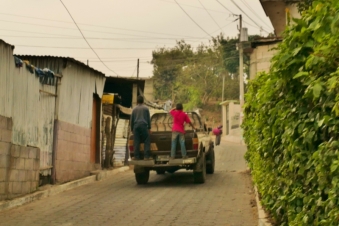 It turns out that we could not see Volcano Fuegos, but we did have a great view of  Volcano Acatenango.  Volcano Acatenango is considered dormant, although it had eruptions in 1924, 1927 and 1972 and is the volcano people climb to reach Fuegos or just to get a view of it. While Acatenango is not active it is still impressive standing at 3976 m.  Later in the day we did find out from one of the hosts at our Antigua hotel that Acatenango has been a little more active than normal, but they did not expect an eruption, turns out it was a backpacker rumour. 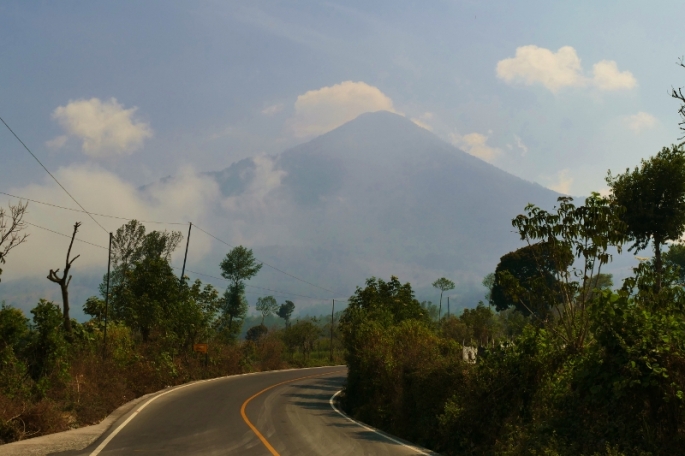