Yaxchilán is a Mayan city located on the banks of the Usumacinta River and is accessed by a 45 minute boat ride, there are no roads.  Yachilan once dominated the Usumacinta River area and was a rival to Piedras Negras and Tikal in Guatemala and Palenque in Mexico.  Yaxchilan has unique architecture, but its 124 texts that are inscribed on stelae, alters and lintels that really make it distinctive.   The hieroglyphic texts describe the history of the city, the leaders and the wars and alliances with other cities.

Yaxchilan’s origins as a small city date to the Preclassic period with the enthronement of Yopaat B’alam in 359.  The city expanded and grew to a regional capital during the classic period under the rule of King Itzamnaaj Balam II, who reigned from 681 to 742, before it was abandoned in the early 9th century.

It was a mad rush from Bonampack to reach Frontera Corozal and drop Willie (Love and Luck’s dog) off in the hotel room, to catch the final boat that departs at 2 pm.  After negotiating a price, we embarked on a 45 minute boat ride up the rocky Usamacinta River. I have read that on the river cruise you can hear and see a variety of animals like the howler monkeys, spider monkeys, toucans and crocodiles, however our boat was going too fast to spot anything and I imagine it would be more likely to see them early in the morning. After rounding the final bend in the river, we spotted a stone structure shrouded by the Lacandon jungle and overlooking the river. 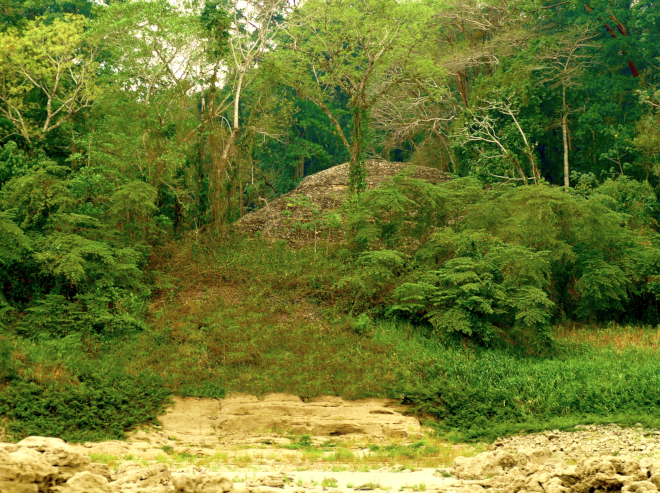 Our first sight of the Mayan ruins peaking through the jungle

After a steep climb from the boat ramp during a thunderstorm, we reached the entrance to Yaxchilan.  Fortunately it didn’t rain.  Our guide led us along the uneven, leaf littered path, to get our first glimpse of the Mayan ruins. The best part of the visit was that we were the only ones there, having passed a Spanish group of tourists leaving on our way in.  The emptiness of the place definitely contributed to the Indian Jones feel of the site.

Walking to the entrance of Yaxchilan

While our guide talked about structure 19 the kids and I were entranced by movement in the trees coming from the spider monkeys and the cacophony of noise from the howler monkeys in the distance.  Structure 19 is a temple also called the labyrinth and is the entrance to this impressive site.  The tomb has four entry doors that lead into an interior spread over three levels, that was reached by interior stairs.  The roof contains the remains of a perforated roof comb. A tunnel through the structure  leads you to the grand plaza. 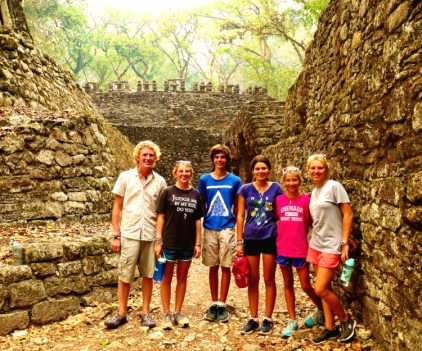 Entrance to the temple or structure 19 on the left and top right.  The bottom right is what you see as you walk through the jungle.

After you walk through the tunnel into the main plaza you can see the other side of the temple with its remains of its roof comb.

Standing near structure 19 you have a clear view of the Structure 44 situated in the western Acropolis.  We did not ascend the stairs to view the structure as we were saving ourselves to go to structure 33.  This temple was one of the later structures completed in around 732 by Itzamnaaj B’alam II.

We entered a structure near the ball court with some well preserved lintels in the doorways.  Like many ancient sites some of the lintels are now housed in the British Museum with a few also in Mexico City. 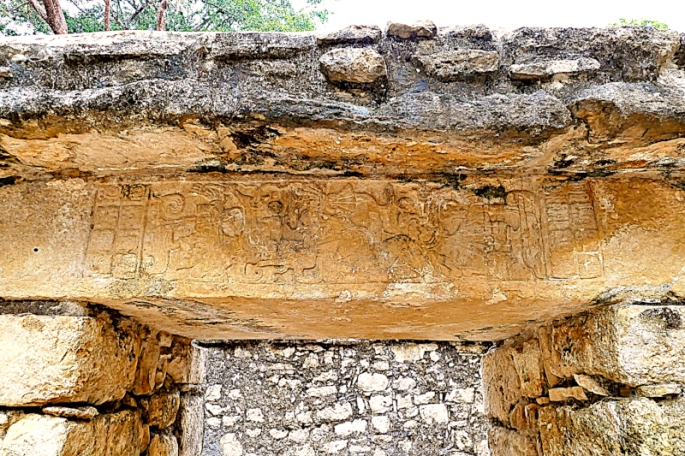 We visited the ball court or structure 67, which is in relatively good state of repair.  Our guide told us that in Yaxchilan the game played was between two players.  The players used their hips and elbows to play the game with the objective of getting the ball through a hoop.  Unlike Chichen Itza, who sacrificed the losing team, Yaxchilan sacrificed the winner of the game to the gods.  The winner after going through the underworld is entitled to reach heaven due to their sacrifice.

Structure 33 also known as the Acropolis and visible throughout the site.  A very steep, ancient staircase, referred to as hieroglyphic stairway 2 leads to the acropolis. The most visible part as you climb the stairs is the large, well-preserved roof comb.  There are several structures on route prior to reaching the top. 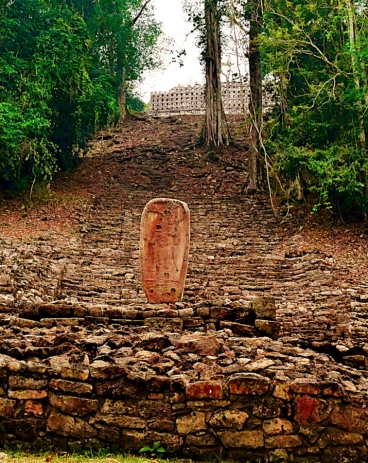 The acropolis provides great views over the plaza and river and would have had a view of river traffic during the 8th century. It is believed to have been constructed by Bird Jaguar IV in 756, who continued with many building projects like his father, Shield Jaguar II.  In front of the structure is stela 31 which was carved from stalactite and has hieroglyphics and figures, I should have looked closer because I couldn’t see it. The stela has been exposed to the weather and isn’t in great condition. 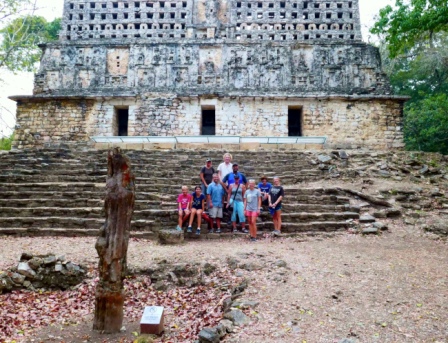 One of the sculptures adorning the roof on the left.  On the right is the weathered stela 31.

Structure 33 is constructed with three doorways, each with with a carved little above the, although one is now in the British museum.  The central doorway has an alcove containing a headless figure believed to be that of Bird Jaguar IV. 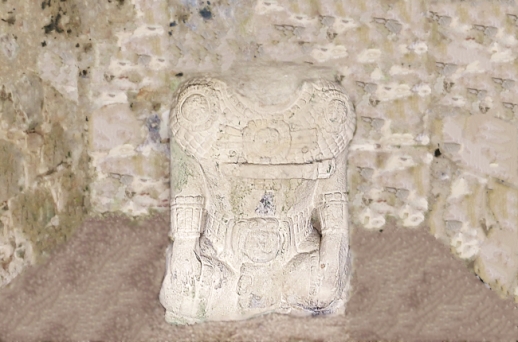 The top step on the exterior of the building has a series of carved limestone blocks.  Carved into the blocks are images of Bird Jaguar IV, his father and grandfather as well as other leaders playing ball games against Yaxchilan’s enemies.  The kings never actually played the ball games themselves, they had people for that.  Our guide told us that if the player in the ball game won, they were sacrificed,  The sacrificed player then played the gods in the underworld, if they manage to prevail in all seven games they go to the equivalent of heaven.  The limestone blocks show the players having managed differing number of steps, with Bird Jaguar IV having all seven steps as he won all of his games.  Our guide told us that the artists who worked on the lintels were also sacrificed, their arms and legs were restrained before they were pushed down the steps to their death.

We wandered around the site glimpsing the occasional spider monkey as they followed us in the trees and the cries from the howler monkeys echoing around us.  I became rather obsessed with trying to photograph the spider monkeys and this is the best I managed.

Wandering around the main plaza

We returned to the river all hot and sweaty in time for our 45 minute trip back.  There was a lot of smoke haze shrouding the river, not sure if it was due to burning off or a fire.

The wet season is yet to start and so the river was very low. So low we actually hit a sand bank.  Luckily for our driver the propeller didn’t seem to be damaged and we were able to continue on our way, perhaps a little more hesitantly.

Recommendations:  Take a hat and plenty of water as it can get hot.