Palenque is located at the foot of the mountain range in the north of the state of Chiapas in Mexico and was known in ancient times as Lakamha, which translates to “Big Water.” At the end of the 16th century it was renamed Palenque taking the name from the surrounding community. The Palenque ruins date from 226 BC to 799 AD, reaching its peak between 600 AD and 800 AD.  At the beginning of 900 AD the city began to decline prior to being abandoned and overtaken by jungle filled with cedar, mahogany and sapodilla trees.  Although 1400 buildings have been uncovered, it is believed that this is only 10% of the city, with the remaining structures still covered by jungle. It wasn’t until 1784 when Jose Antonio Calderon, followed by Antonio Bernasconi, that the site was rediscovered and documented.

Like Tikal, Chichen Itza and Copan, Palenque was one of the most powerful Classic Mayan Cities.  Although Palenque was much smaller than other Mayan cities, it makes up for its size through its architecture, sculpture, roof combs, bas reliefs and vast hieroglyphic inscriptions.

The most notable structures in Palenque are the result of rebuilding following attacks by Calakmul.  The rebuilding effort was predominately led by its most famous ruler K’inich Janaab Pakal, or Pacal the Great, who is also responsible for the city’s architecture and art.   Pacal ruled Palenque from 615 to 683.  The hieroglyphics in Palenque has provided historians with the history of Palenque and knowledge of its famous ruler, Pacal and his achievements, as well as other rulers.

The weather forecast had temperatures reaching a peak of 41°C, so we arrived at 7.45 am prior to opening.  We quickly acquired a guide, Arthur, after parking our cars. Arthur has very good English and a good sense of humour and quickly organised our tickets, before we entered the site.

Arthur discussed the plants found in the area as we approached the corner of a stone temple, the only part of the temple visible underneath the jungle.  Arthur explained when the archaeologists arrived a Paleque all of the pyramids and structures were similarly covered in jungle. As we passed through the trees we glimpsed our first unobstructed view of the royal palace and Temple of Inscriptions. 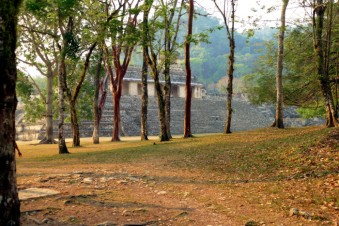 Photo on the right shows a temple that remains covered by jungle and gives you an idea of how it looked when found by archaeologists.  Photo on the left shows the entrance to the main complex.

The temple of inscriptions is probably the best preserved building from the exterior, but you are no longer allowed to climb it or enter the interior.

We began our tour with the Royal Palace.  The Palace is a complex of buildings, hallways, terraces and courtyards that formed the center of the city.  The palace was remodelled and expanded over several generations and is the largest structure in Palenque.  The palace was used by the aristocracy for functions, entertainment and ceremonies.

We climbed the stairs to view the carved reliefs of Pakal and other members of the royal family.  Interestingly our guide told us that Pakal had a limp and that the carving of him shows one leg shorter than the other.

Other notable features of the palace include the observation tower.  It is speculated that the tower may have been an astronomical observatory.

The palace contains various bas reliefs, some still have evidence of the coloured paint that once adorned them.  I liked the Jack face featured to ensure good crops and rainfall.

After walking around the courtyard, we went down into the labyrinth of dark, enclosed hallways.  The only thing visible was a few small bats. 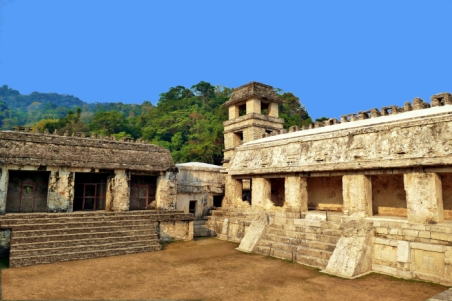 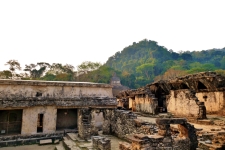 Photos of the courtyard and one of the labyrinth of tunnels leading to the underground rooms.

We continued up a slight incline to reach the temples that comprise the cross group.  The cross group consists of three pyramids with temples, the Temple of the Cross, Temple of the Sun and Temple of the Foliated Cross.  Following the death of Pakal, his eldest son K’inich Kan B’alam became the king and constructed the Cross group of buildings as well as completing his father’s tomb.

The ‘Temple del Sol’ or the ‘Temple of the Sun’ has the 4 meter tall crest on top of its pyramid which remains well preserved. Although there are carvings inside of Kan B’alam’s birth in 635 AD and his accession, you are not allowed inside to see them.

‘The Templo de la Cruz’ or the ‘Temple of the Cross’ is the tallest in the cross group and a climb to the top will afford you not only with views overlooking the Palenque site, but also of the stone tablets in the sanctuary. One tablet on the right is of the underworld deity smoking tobacco and the other on the left is of Kan B’alam in royal attire.  Behind the tablets is a panel explaining Kan B’alam’s accession. 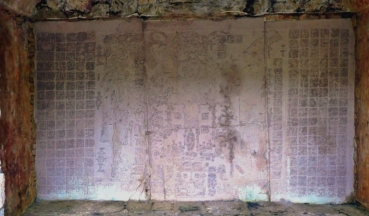 The kids having a break at the top.  Hieroglyphics explaining the king’s accession. 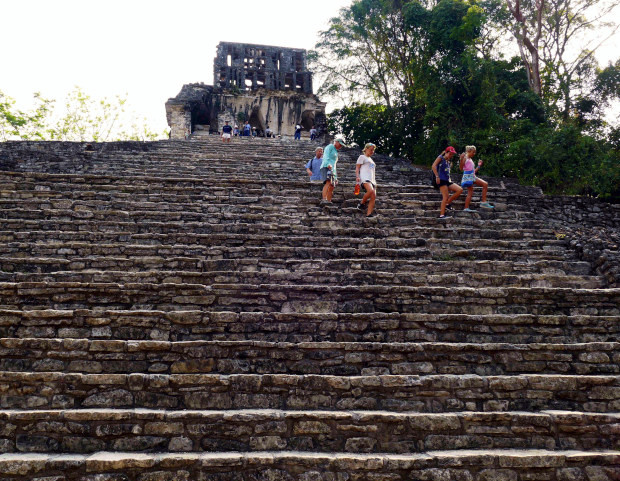 ‘The Temple of the Foliated Cross’ is situated on the peak of a small hill and overlooks the other temples in the cross group.  The temple has suffered damage over the centuries and its front façade and cresting have collapsed.

After browsing a few souvenir stands we walked past the Mayan ball court.  Interestingly we have seen the ball court in Chichen Itza, which is huge and was used by teams of 7 players.  At Chichen Itza the team that lost the game were sacrificed.  Our guide told us that there is no evidence in Palenque of any form of sacrifice, lucky for the ball players.

We continued on to the last group of temples, the most significant being the ‘Temple of Inscriptions’.  It is speculated that the construction of the Temple of Inscriptions began around 675 AD with the purpose of being Hanab-Pakal’s funerary temple. The pyramid stands approximately 27 meters high and measures 60 meters wide and 42 meters deep.  The temple incorporates hallways, subterranean galleries, courtyards and hieroglyphic panels, all of which have been remodelled over time. The hieroglyphic panels record approximately 180 years of Palenque’s history and is the second longest text, after Copan’s stairway in Honduras. 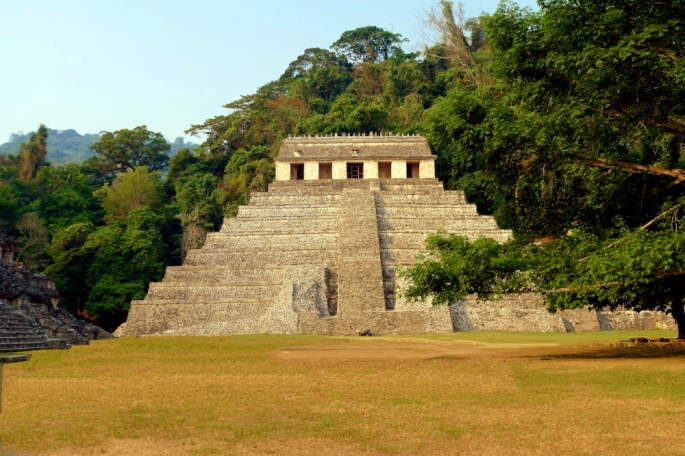 Inside the Temple of the Inscriptions is a staircase which leads to the upper part of the pyramid, where a funeral chamber is located.  The funeral temple was excavated in 1950 by Alberto Ruz Lhuillie, who discovered a richly carved sarcophagus containing the remains of Pakal II or K’inich Janahb Pakal.  Pakal’s remains were found with his face covered by a jade mosaiced mask, while his body was enveloped in a jade adorned suit, both of which are now contained in a museum in Mexico.  The lid of the sarcophagus depicts Pakal, as Maya Maize God.  On one of the sides of the sarcophagus are carvings of Pakal’s parents.  A replica of the sarcophagus is found in the nearby museum.  You are no longer allowed to enter the pyramid as it has been closed to stop further deterioration of the murals and funerary chamber.

The temple of the skull also known as Temple XII and Temple of the Dead Moon, stands alongside the Temple of Inscriptions and the Red Queen Temple. The temple is named after the stucco relief of a rabbit skull. 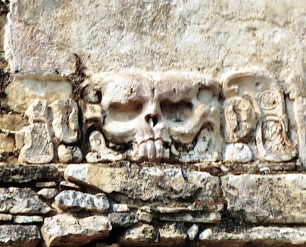 In 1994 inside ‘Temple XIII’ or the ‘Tomb of the Red Queen’ was discovered and is believed to be either Sak Kuk, Pakal’s mother or possibly his wife.  The temple is known as the Red Queen Temple, because it was covered in bright red powder made from cinnabar.  Sak Kuk ruled for the first three years prior to Pakal reaching the age of 12 and becoming king and possibly continued to jointly rule with Pakal for a further 25 years. Due to Sak Kuk’s role and power, it is likely she had an elaborate funerary temple, possible Temple XIII.

Arthur took us into an area not open to the public and showed us some of the trees grown and their uses.  We saw the rubber tree, which was once used to make the balls that were used in the Mayan games.  We also saw the Chicle tree which Mayans used as a natural chewing gum to keep their teeth clean.  Inter-dispersed are mahogany and cedar which overtook the site.

From left to right; the rubber tree, mahogany tree and the chewing gum tree

Jane and Tarzan (Sally and Max)

After our guided tour we continued on to the museum, named after the archaeologist Alberto Ruz Lhuillier, who discovered the Tomb of Pakal II. The museum is home to many items that were found in the Palenque archaeological site.  The first room you enter with exhibits houses a number of stucco reliefs including the one below of Pakal which was origininally in temple XIX.

There is a room which holds a replica of Pakal’s sarcophagus and a replica of his funeral mask is housed in a room with jewelry.  The original sarcophagus remains in the Temple of Inscriptions but due to preservation reasons can’t be visited. 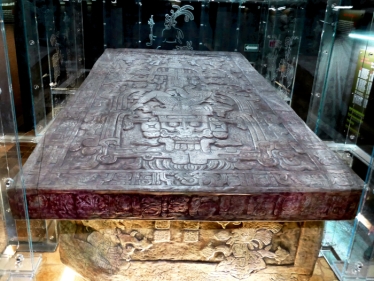 Replicas of the sarcophagus and funerary mask

I saw what looked a bit like pottery totems which looked pretty cool, turns out they are incense burners.  Pretty elaborate for an incense burner. 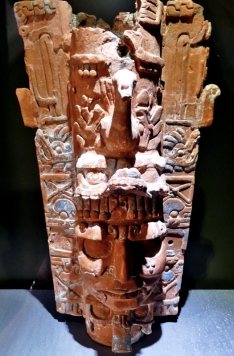 Once you enter inside the site, there are no toilets or vendors selling water or food.  There are however both prior to entering.