Background Information on the Canyon

Sumidero Canyon is situated within the Sumidero Canyon National Park, located north of the city, Chiapa de Corzo in southern Mexico.  The area surrounding the Sumidero Canyon was decreed a National Park in 1972 and currently incorporates 21, 289 hectares of rainforest, grasslands, canyons and the Grijalva Rivera, which is managed by a number of different organisations. The canyon was formed around the same time as the Grand Canyon by a crack in the earth’s crust, which was subsequently eroded by the Grijalva River, creating the canyon we see today.  Within the canyon there are some thirty rapids, five waterfalls and three beaches. Thirteen kilometres of the river still runs through the canyon.  Towards the end of the canyon is the Chicoasen Dam, which is one of several dams along the Grijalva River that provides not only water, but also generates hydroelectric power for the region.

We drove from San Cristobal downhill to the town of Tuxtla Guttierrez.  We did make a wrong turn and end up at the gates to the miradors instead of the river, but we did eventually get there. We purchased our tickets which included both the river and the drive around the top of the canyons, where you can stop at the miradors for photos.  We were told that we would have to wait 15 minutes before the boat would leave, which turned into an hour as the boats don’t leave until every seat is sold.  Despite having left home at 8 am to do the boat trip early, it ended up being close to lunch time before we left and it was incredibly hot by then.  The boat have no shade top, so you definitely need hats, sunscreen and water.

The canyon is characterised by being tall and narrow.  Its walls range in height of between 300 and 700 meters high, but do reach 1000 meters at points. The width between the walls varies between one and two kilometers. 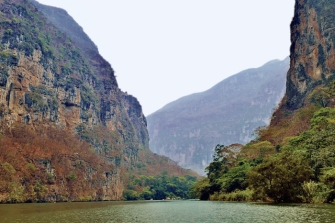 The canyon is home to the endangered American river crocodiles, however we did not see any during our trip. We did stop a couple of times to watch the spider monkeys climbing in trees close to the river. 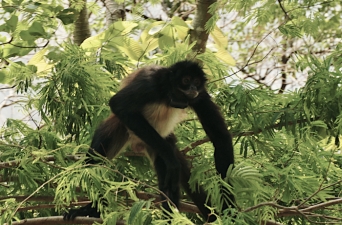 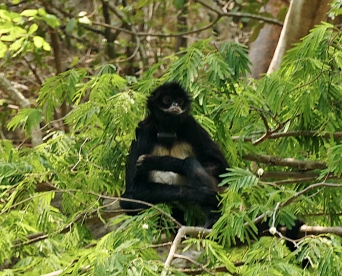 The canyon walls contain numerous small caves, we went inside one cave in the boat.  Unfortunately the tour was in Spanish so we had no idea what we were looking at, with the exception of seeing an image of the Virgin of Guadalupe. It turns out that the cave, named the ‘Cave of Colors’ gets its name from the magnesium, potassium and other minerals which creates the colours on the cave walls.  We did notice the pink rock when we were there.

Another cave that we motored past had a stalactite called the ‘Caballito de Mar’ or the ‘Seahorse.’ Someone in our group did comment that the stalactite looked like a seahorse.

The stalactite hanging from the center of the roof is shaped like a seahorse.  Can you spot it?

Our boat trip continued along the river until we reached the ‘Arbol de Navidad’ or the ‘Christmas Tree.’  The rock formation, which is in the shape of a tree is created by deposits from the waterfall when it is active and from the moss that covers the rocks.  During the wet season this rock formation is transformed into a waterfall, as it was still the dry season when we visited, there was no waterfall, not even a trickle.

The trip continues on until you reach the Chicoasen Dam, at this point there is a boat vendor selling refreshments and the driver who collects tips.  We sat there for about 20 minutes in the heat with a few complaints from the kids, mainly mine, at how hot it was.  Finally we did the return trip along the river to the dock.

Technically the river boats run from sunrise to sunset, however later in the day if the boat is not full they will cancel the trip.  You don’t need to pre-book, just turn up and wait for the boat to be full or alternatively you can pay extra and have the boat to yourself. The boat trip lasts about 2 hours.  Get there early as it is incredibly hot.

Your ticket/wristband includes the river boat cruise and the 5 miradors and costs 230 pesos or about $17 AUD.  You have 24 hours to use your wristband drive the canyon top to see the 5 miradors.