While our passage started off as peaceful and uneventful, over the four and half days that changed.

The afternoon of our second day of passage began with a single white booby landing on the rail of our bow.  Within a couple of hours, he was joined by a further two boobies.  It appeared that it was a little easier to migrate by catching a lift on a boat than to fly.  I finished by shift at 3 am and the birds were still sitting on the bow some 15 hours later with only the occasional bickering between them. 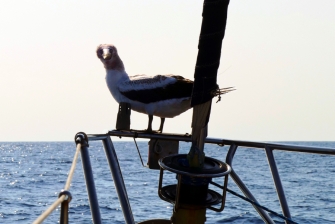 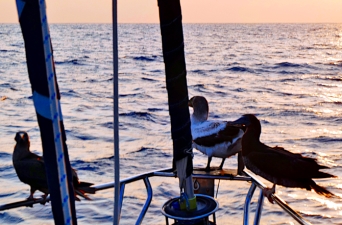 By morning the birds were gone, and we settled in to another somewhat boring day.  I worked on the blog, Max and Ava watched movies together and Andrew kept himself busy on watch and listening to music.  By mid afternoon we were beating in to head winds and the boat was slamming into the waves, the worst king of sailing.  We ended up having to shut the hatches as there were waves coming over the bow.  I left the hatch in the kitchen and lounge areas open a fraction because it was so hot. Everyone disappeared to bed or more movies as was the case with Max and Ava when a large wave came over and poured through the hatch like Niagara Falls, soaking both me and my computer.  After cleaning up, Max and Ava had a look at my computer which would not turn on.

Andrew woke me up early as he had extracted the hard drive from my computer and wanted me to copy my files onto a backup drive.  He was concerned that the strange noises emanating from the hard drive was a sign of its impending doom. Six hours later, after copying most of my files, I could no longer find the hard drive, nor could Andrew and it appeared that the hard drive had bit the dust.  Max took great pleasure sending my computer flying in the air from the cockpit, before it took a nose dive into the Pacific Ocean, never to be seen again.

Soon after dinner, while Andrew was on watch he noticed the light on the temperature gauge was on, although the alarm didn’t go off.  The engine was quickly turned off and we just drifted in circles a couple of miles off shore, while Andrew identified the problem.  Eventually he discovered the alternator arm had snapped off and that the belt was no longer attached to it or the water pump and therefore the water was not cooling the engine down.

Max and Andrew set to work finding a way to solve the problem, while Ava and I went up to the cockpit on watch.  Ava and I got a little concerned when two local boats appeared to be headed towards us and Andrew suggested we call up Love and Luck with our co-ordinates in case anything went wrong. Mark said they would put both engines on and get to us as quickly as they could.  Meanwhile the local boats had veered away from us and there was no trouble.

A couple of hours later we had love and luck circling us in case we needed help and Andrew frantically trying to get the engine fixed.  Finally, some three hours later and a lot of cursing from downstairs, the engine was again running, with the alternator tied on to the motor with spectra. (left over from Jamie doing our life lines a few years ago) Thankfully Utopia and Love and Luck were back on course and Andrew was able to get a couple of hours of restless sleep during my watch.

We arrived at about 9 am in to Zihuatanejo, after what seemed like a very long passage.