Sienna has a population of about 54, 000 and is a small city in Tuscany. The center of Sienna is a UNESCO worlds heritage site. Sienna is surrounded by vineyards of Chianti and olive groves, it is set on three hills and has winding alleyways through the beautiful city.  It is home to one of the oldest universities in Europe.  Sienna was created by the Etruscans before they were conquered by Ancient Rome.

The Duomo in Sienna with its black and white marble and intricately carved statues and gargoyles.  We unfortunately missed going inside this one but from photos it looks pretty amazing.

Tourist Information on the Sienna Duoma

Written and researched by Ava, Photos and captions by mum

San Gimignano is a small hill top town in Tuscany.  It is famous for its medieval towers.  In 1300 BC the town was found by the Etruscans.  The town was a stopping point in medieval times for those traveling to Rome and the Vatican.

The view of San Gimignano as you drive towards it surrounded by picturesque landscape.

We visited the beautiful tourist town with views over vineyards, olive trees and beautiful Tuscan homes.  We tried gelato, the ‘best in Tuscany and in the world’.  The town has lots of tourists souvenir shops, delicatessens and gelaterians.  I think it is my favorite Tuscan town.

One of the gelati stores we visited claimed to be the best gelati store in Tuscany and the World.  We couldn’t complain it was good, but we are yet to have a bad one. 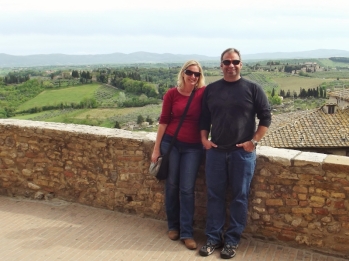 The town is surrounded by olive groves, grape vines and scenic mountains.

The town is filled with so many windy roads and each one packed with assortment of shops selling souvenirs, clothing, leather, swords or delicatessens.

Written and researched by Ava, photos and captions by mum

The Leaning Tower of Pisa was actually just a bell tower and forms part of the religious complex in the Duomo Square. It is known around the world for its amazing tilt so that is why it is one of the seven wonders of the world, it started to lean when it was being built because the foundation was built on soft soil which could not support the weight of the tower. The tower has the height of  58,36 meters and tilts about 5.5° and you can climb the 273 steps up to the top.

Although everyone has seen photos of it before it is still very cool to see it in person.  We were here 20 years ago and you could not climb to the top as they were trying to fix the tilt so it didn’t collapse, glad to see it worked.

You have to get your photo taken in front of this iconic building.

Tourist Information on The Leaning Tower of Pisa

October → the Tower of Pisa is open between 09,00 – 19,00 (with some variations at the start and end of the month that overlap with September/November hours

Cost: Tower – €18 each for those over 8 years of age, there are three other monuments the Bapistery, Camposanto and Sinopia Museum.  To visit one of them is €5, two of them is €7 and all three is 8€.

Written and researched by Ava, photos and captions by mum

Montalcino is a small hillside town in Tuscany, its noted for its wine, Brunello di Montalcino. There town is beautiful with its narrow windy streets, arches and stunning views over the countryside. The name, Montalcino comes from a type of oak tree that once covered the land. Montalcino also has a castle at the highest point of the town and was built in 1361.  The castle incorporates some of the earlier town walls, that date back to the 13th century.  Although Montalcino was its own town, it did align itself with Siena and during the wars between Florence and Siena from the 12th century onward it was caught in the crossfire and eventually taken over, while the castle was never taken.  The castle has changed little through the years and remains largely intact.

We went to Montalcino after getting lost a few times, in time for lunch and a gelati. On our way into the town we passed this beautiful church, called ‘The Church of the Madonna del Soccorso’. The church was built in 1330 on the remains of the previous church and has undergone expansion and changes several times over the centuries and this can be seen in the different styles like the facade and bell tower.

Our walk into town took us past the Church of the Madonna del Soccorso and past the wild poppies that grow everywhere in spring in Tuscany.

The town is very beautiful and even has its own castle. We didn’t have the time or the inclination to walk around the walls as it was freezing and we hadn’t brought our jumpers. The castle an impressive, solid structure overlooking the town.  We did walk around the inside and found on the ground a baby owl.  We were not sure if it had fallen from its nest or not, but staff arrived to attend to it as we were leaving.

Walking around the streets of this beautiful town.

The castle at Montalcino with its large quadrangle and the little lost owl.

Written by Ava, Photos and captions by mum

Italy is home to a small town in Tuscany called Pienza, it became a UNESCO world heritage site in 1996. Pienza’s original name was Corsignano. In 1405 Corsignano was the birthplace of Aeneas Silvius Piccolomini who became Pope Pius and he re-built the village and re-named it Pienza.

View of Pienza before you get there.

We visited Pienza, another beautiful Tuscan town, this one had received a lot of bombing during WW2 and you could see the pot marks in the buildings, particularly the church.

Walking around the outer wall of Pienza

Photos of the town and the view over the Orcia Valley.

South of Sienna is the town Montichiello. This town was founded over 1 000 years ago. The church of Leonard and Christopher is inside the village. Surprisingly enough only 3 out of 17 towers are left, in one of the highest parts of the village is Torre del Cassero which survived. 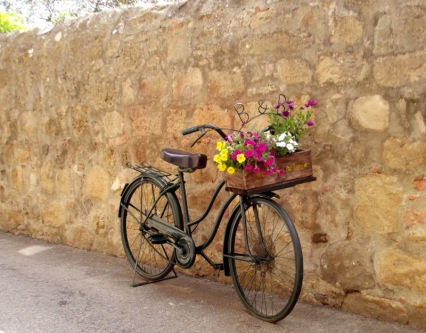 Walking the streets in Monticchiello.

Views from Volterra and street views of Volterra.

Volerra is a town in Tuscany on a mountain top, its history goes back to the 7th century and was once called Velathri. The Romans took over the town and pushed all the Etruscans out then they changed the name to Volterrae. If you take a look around you will see Roman ruins of a theater and a sauna. You can also see to old forts and a fortress called Rocca Vecchia and it was built in the 14th century on a rocky outcropping. There are also walls which surround the city.

In this Tuscan town that we went to comes complete with its own roman amphitheatre and gelato of course. Tristan had school work to complete and Max and Ava didn’t want to go so it was just Josh Andrew and I.