“We travel to change, not to change a place, but to change ideas” Hippolyte Taine

We have spent nearly a month in Martinique and we hired a car a few times both for shopping and to do some sightseeing.  To find out more about what we saw and did read below: 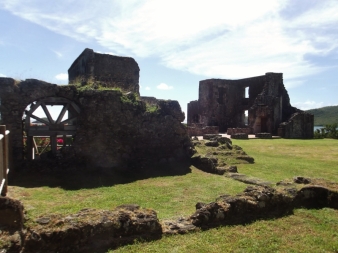 Perched close to the mangrove-coasted Baie de Tresor, the 18th century castle comes complete with a donkey-pulled sugar mill and all other associated machinery required to make sugar. The actual ruins of the castle were fairly degraded, but prominent structures such as the water tanks and the slaves’ prison are still well preserved. The tour used an interactive map and pen to activate the audio, and some displays lit up when you pressed the button labelled with a specific area of the mill. There was definitely some competition here, to see who could make the most things light up on the map.

View from the main house. 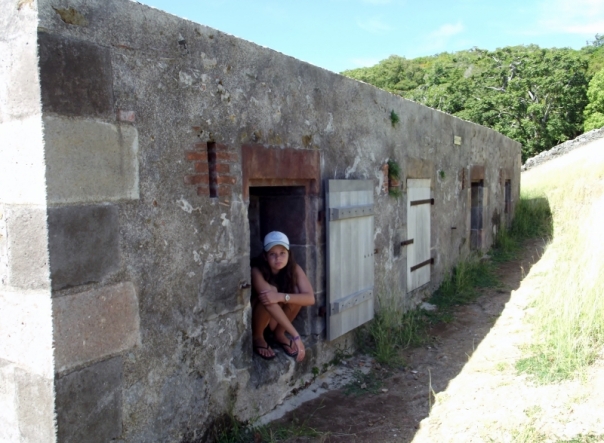 Ironically the best preserved of the buildings was the slaves prisons.

Down the hill from the chateau, a large moulin stood. With two beams on either side, donkeys would rotate the mill and cause the three rollers in the middle to turn against each other; between these rollers sugar cane was placed, and the juice that was subsequently squeezed out flowed freely into the drains leading to the boilers. There was a long, complicated process; the exact details elude me with time, but basically the juices were boiled, and boiled, and solidified kind-of, and then boiled more. Various combinations of these produced either refined sugar or raw sugar. There was also a small rum distillery situated nearby, but the audio tour focussed very little on this, leading one to believe that the rum wasn’t the most important export of Chateau Dubuc. There were curing rooms, where the sugar was placed in a cone-shaped bag and the molasses dripped down and out of the tip of the coin, leaving a thick block of dry sugar. There was the storage room, to store the sugar, and a pier that had once carried this sugar off to other places. A gravity dam, as well as some kind of floodgates, were next to see. A single rectangular-shafted well was wreathed in fig trees, and their dangling vines. We of course kept our eyes out for the Manchineel tree; so toxic you can’t even stand underneath it, or breathe near it. We saw several trees with the distinctive red painted stripe on their trunk, courtesy of the locals. 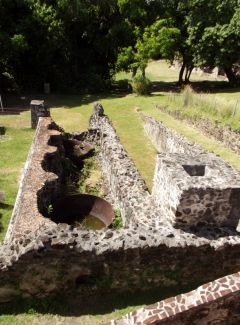 Replica of the mill which used two donkeys to grind the sugar cane and the boilers used to separate the sugar from the juice.

Coffee was another thing Castle Dubuc exported; two large storerooms had been used to hold it all, and a coffee mill could be seen as well, used to remove the outer layers of the bean without crushing the bean itself.

Views of the storage facilities that housed coffee and sugar.

One thing the audio tour didn’t mention; the owner of the Castle Dubuc was notorious for using a lantern to lure ships in to shore, wrecking them on the rocks so he could loot their goods. Whether the tour didn’t cover this because it had little to do with his estate, or because they believed it to be untrue, or any other reason, I don’t know. However, even skipping that intriguing tidbit, the Chateau Dubuc was a beautiful property and showed visitors a historical site of Martinique, and an informative lesson on the production of sugar, which used to be one of Martinique’s (and, indeed, most of the Caribbean’s) most important and influential crops. 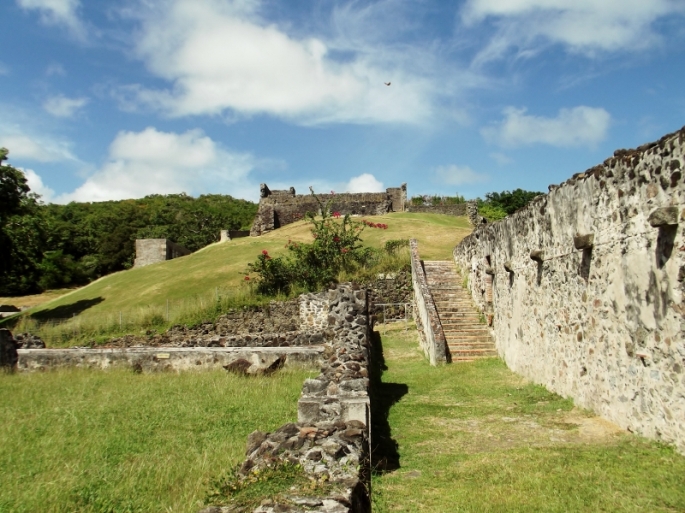 The ruins of Dubuc Chateau

Dubuc Chateau is set on a peninsula over looking a beautiful bay with a very scenic drive out to it.

We hired a car along with our friends off Totem to visit the town of St Pierre to see the ruins.  It was a bit of a drive from St Anne, through the capital Fort de France to reach it, but well worth it.

The Picturesque town of St Pierre with the Mount Pelee Volcano in the background.

St Pierre was the capital of Martinique prior to Mount Pelee volcano eruption in 1902, which wiped out its 30 000 residents on May the 8th, except for a few people. The hot blast of gas and debris, decimated the population, ruined the city and boats in the harbour burned and sank.  The famous survivor, Louis-Auguste Cyparis, who had been arrested earlier on the 8th of May for a street fight was in solitary confinement in a partially underground cell.  His cell was without windows and had a small grating near the door that faced away from the volcano which is why he survived the pyroclastic cloud.  He was rescued 4 days later by a rescue party, suffering burns to his back, legs and arms.  Louis went on to star in a circus that toured America recounting his story.  It is believed that there were two other survivors a shoemaker on the outskirts of town and a young girl who escaped in a boat.

The cell where Louis-Auguste Cyparis survived the explosion of Mt Pelee in 1902.

Today the most famous remnants of the Volcanic explosion besides the jail cell is the old theatre.

St-Pierre offers snorkeling and diving on some of the boats that sank from the volcano explosion, one is quite close to shore.  You can also climb Mt Pelee, but you might want to do it early as the fog covers the top of the mountain, quite often.  Throughout the town there are relics of buildings that survived the volcano.  There are many cafes and restaurants to eat at while there too.

One of the surviving walls of a building in the town.

The ruins are free and easily accessible and there is free parking available not far from the ruins. 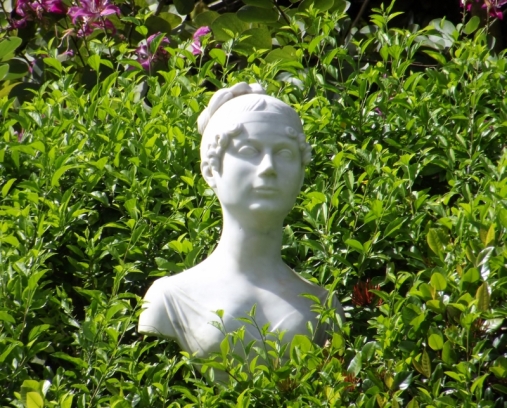 Bust of Josephine in the gardens of her childhood estate, before she married Napoleon.

After a morning spent shopping, as everyone needed clothing, we then spent the afternoon sightseeing.

We began with the Musee de la Pagerie, otherwise known as the birthplace and home of Empress Josephine, Napoleon’s first wife.  So yes we were back on the Napoleon trail again this year after our visit to his home he was exiled to in St Helena where he died.  Empress Josephine formerly known as Marie-Joseph-Rose Tascher de la Pagerie lived on the La Pagerie estate for the first 16 years of her life.  The estate , with its 300 slaves produced cotton, coffee, indigo and of course sugar.  Josephine’s home is in ruins with little more than the foundations still in existence, the kitchen still exists and has been turned into a small, but interesting museum with portraits, death masks, Josephine’s stockings and other artifacts. 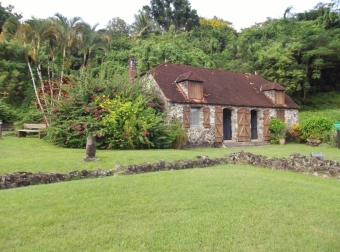 The kitchen which was once used to serve food for Josephine’s family stands behind the foundations of where her house once stood.  The kitchen now serves as a small museum.

Inside the museum are paintings, china from the time, a replica of Josephine’s childhood bed and other memorabilia. 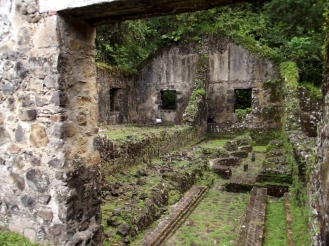 The remains of the old sugar mill on the La Plagerie Estate.