Luderitz is a small coastal town in the southern part of Namibia.  The town is known for not only its diamonds, but also nearby ghost towns and colonial architecture.

The bay where Luderitz is situated was discovered in 1487.  It wasn’t until the early 19th century that it was discovered that there was prolific number of whales, seals and fish as well as guano harvesting which established Luderitz as a trading post.  In 1883 land was purchased on behalf of Adolf Luderitz, from Bremen in Germany, from a local chief.  Luderitz died a few years later in 1886 after not returning from an expedition to Orange River and the town was named in his honor.

In 1907, a German railroad worker, August Stauch, asked fellow workers to keep an eye out for sparkling stones along the railroad tracks in the region.  A laborer found a diamond, prompting Stauch to resign from his job and start searching for diamonds.  In 1908 he found a few stones and once they were confirmed as diamonds the diamond rush began in Luderitz.

Authorities promptly established a prohibited area where only licensed miners, prospectors and laborers were allowed to go.  This diamond area in the Namib desert stretches from the Atlantic Coast to about 100 km inland and from the Orange River, bordering South Africa to 72 km north of Luderitz and covered an area of 26, 000 square km.  The diamonds in the desert were found on the surface of what was probably riverbeds in the past.  By WW1 about 7 million carats of diamonds had been mined.  In  1915 South Africa conquered the German rule over Namibia and by 1920 De Beers owned the diamond rights although under a different name at that stage.

In 1923 De Beers had the exclusive rights to mine for diamonds along the ocean beach from the Orange River north and over 80 years mined 65 million carats of large, high quality diamonds.

During the 1940’s the emphasis of diamond mining shifted to the shores and the sea and the De Beers headquarters relocated to Oranjemund.  Since 1961 the majority of mining is along the coast and a few km out to sea and led to the development of mining for the new environment like vacuum extractors, dredgers, probe drilling platforms and floating treatment plants.  Since 1994 the government of Namibia set up a new company which owns a 50:50 share with De Beers for mining.

Lüderitz still has several small satellite mines but these days tourism to nearby ghost towns in the desert is its main industry.  Today, namibia in general is the 6th largest diamond mining country in the world.

This is one of the diamond boats that was anchored near us in Luderitz.  Most of Namibia’s diamond mining is marine mining.  Divers operate within 30 m of either the shore or a small vessel.  The dives then use air lift dredging where they use the suction hose vacuums to suck up the alluvial gravel.  When the gravel gets to the surface its sorted and screened.  Larger vessels use dredgers to suck up the alluvial gravel and go to depths of between 30 – 80 meters.

The Town of Luderitz

We walked around Luderitz a few times getting a few more provisions and parts to make a few repairs.  One afternoon just Andrew and I went out for a walk around and looked at some of the large, wealthy homes and some of the colonial architecture.  The main road is paved but once beyond that its all sandy roads. 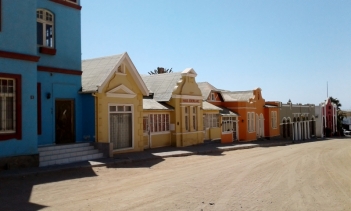 We did find a little oasis in Luderitz when we stopped at the garden cafe for a drink and cake.  The servings were large and I think I had the best carrot cake I have ever eaten and Andrew enjoyed his cheesecake.  We sat out in their lush little garden enjoying our food when a large tortoise walked by, he/she was very accustomed to visitors and paid us no attention at all.

The Garden Cafe does not have its own website, but if you click on the link you can read about it in lonely planet.  It does light meals as well as hot drinks, cakes, slices and cookies.  Its located on 17 Hafen Street, Luderitz.  Contact number: 081 124 831

The mooring master in Luderitz Bay was a man called Andy. He was very helpful and friendly, and gave some advice on various things we were trying to fix, such as the spinnaker pole. He told me of his deep sea diving in a large metal suit – basically a one-man submarine – and of his plans to find gold hidden in islands and raising a sunken ship from off the coast of South Africa, once he got the funding. We talked for hours about methods to approach all his plans, and of raising the ship and using weights and chains to take it to shore, restore it, and sail it to Holland. Really an interesting man.

The Dutch called it Walvisch Baye and the English Whale Bay, it was eventually called Walfish Bay, then Walvish Bay and as we now know it Walvis Bay.  Walvis Bay is located just north of the Tropic of Capricorn on the west coast of Namibia.

The waters around Walvis Bay are rich in plankton and marine life attracting the southern right whales and drew whalers and fishing vessels to the area.  Walvis Bay is now an important tourist town for Namibia due to its close proximity to attractions like Dune 7 and the abundant bird life.  Other industries in the area include guano collection from the artifiicial Bird Island, the large salt works, import and export facilities for landlocked countries like Botswana,  Zambia and the Democratic Republic of Congo and a large fishing and processing industry.

Our Time in Walvis Bay

The bay where the boats anchor is a long walk to town and can be difficult to find a taxi to get there, sometimes you can ask at the bar at the end of the jetty to call you one, you can wait at the edge of the parking lot or walk over to the nearby Walvis Bay Waterfront (during lunch and dinner there are frequently taxis dropping people off)

You can either drag your dinghy up the shore and leave it there or if you time it right you can tie up to the jetty, just keep in mind the tides do vary a lot and it may end up beached.

I was waiting for a taxi to do our final provisioning when I saw this pair of pelicans which kept me enthralled until they flew off.

During our passage from Simon’s Town to Namibia we heard the name ‘Divanty’ on the radio several times.  We thought it was weird because we had left Divanty in the Seychelles 18 months earlier and they were headed back to India.  Likewise they heard us on the radio and thought we would have been in the Caribbean by now.  Through email we discovered we were both headed for Namibia to do the Atlantic crossing, they had a few problems and were going to be a few days later than us.  We ended up waiting in Namibia for a few extra days so we could catch up.  They were traveling with an Australian boat, ‘Tin Tin’ who we had not met before.  While in Walvis Bay we caught up with both boats and had lunch out a few times while there.  Little did we know at the time, that we would go on to spend many months more with Divanty during our crossing of the Atlantic. 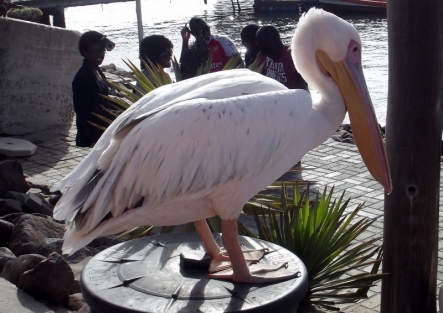 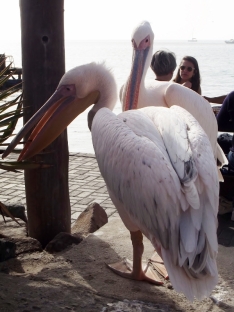 We had lunch with our friends Divanty and Tin tin, while eating this pair of pelicans kept us entertained with their antics. Even they have a faint pink tint to their feathers, like the flamingos.

The one time I’m glad we don’t have a catamaran was in Walvis Bay, although we loved driving past and seeing the cute, cheeky seals sitting on the back step, I’m not sure I would want to tackle one to get them off.

We spent a couple of weeks last year in Namibia so we only spent one day sightseeing while here. We hired a car and started our drive to Swakopmund stopping at Dune 7 on the way.  Dune 7 is the tallest dune in Namibia at 383 m and named because its the 7th dune after the river Tsauchab.  The day we hired the car was unbelievably hot, there is usually a breeze in Walvis Bay, but not today.  We arrived at the dune and nobody wanted to get out of the car, the heat was oppressive.  We chose not to sandboard or do the dune buggies, there is a company out at Dune 7 and there are several others that do trips out there.  Having not done it, I can’t really recommend anyone. This is definitely an activity for a cooler day and either early morning or late afternoon if you are there in February/March.

After Dune 7 we continued on to Swakopmund, a beach resort town with German colonial architecture.  We did walk around the town, but within an hour everyone was sweaty and irritable, so after finding some cool drinks we all opted to head back to Walvis Bay for lunch.

Our last stop for the day was to Walvis Bay Salt Holdings.  There is a road that leads you past the evaporation pans and past the mountains of salt.  This company produces over 700 000 tons of high quality salt a year, most of the salt you buy in South Africa comes from here.  Flamingos are also found around the salt pans and Walvis Bay due to the algae in the pans.  This algae is what gives the flamingo the pink coloring. There are generally more of the greater flamingos seen in Walvis Bay than the lesser ones.  However, I think the ones we saw were the lesser flamingos because their beaks were almost maroon with black tips.

On our way to the German town of Swakopmund we stopped at Dune 7 for a look.  It was record temperatures on the day we visited and nobody wanted to get out of the car. 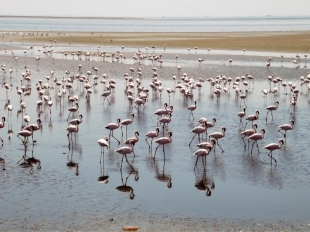 We drove out to the Walvis Bay Salt Holdings to look at the flamingos.  They are a very light pink colour, which is determined by what they eat.

Ava with the flamingos in the background